This year I’m participating in a trial of the Super Composter hot-bin for the folks at SoilFixer.

Progress to-date goes like this: I’ve been sent a Super Composter hot composting bin to test out, which I set up back in May. The initial load of compostable materials went in on a dull day at the beginning of June. At the end of August the first batch was checked, removed and replaced with a second batch of greens and browns.

This second batch contained more greens (nitrogen-rich) than the mostly browns (carbon-rich) initial load, and as a result achieved much more impressive temperatures. A couple of days after loading, the temperature in the bin had reached an impressive 40oC, which was 10oC higher than the highest reached in the first batch, and roughly twice the highest recorded in the standard-issue black plastic compost bin that I was using as a control. They tailed off gradually over the next couple of weeks, as the bacterial activity within the compost steadily decreased, although I didn’t add any fresh material, which could have kept the temperature a bit higher.

Yesterday, with six weeks or so on the clock for the second run, I decided to take another look at the contents of the bin. The temperature had fallen back to 18oC, only a few degrees above the ambient on a cool, but sunny Autumn day. The contents were already looking good though: 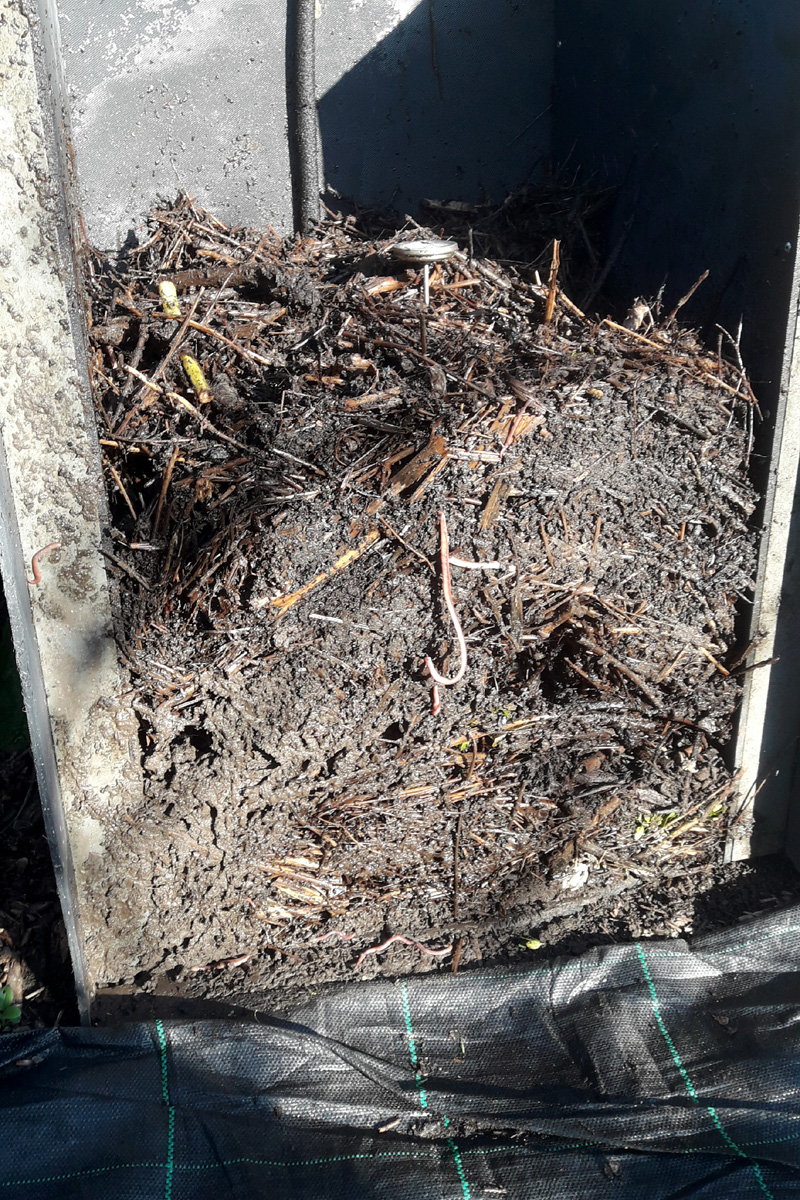 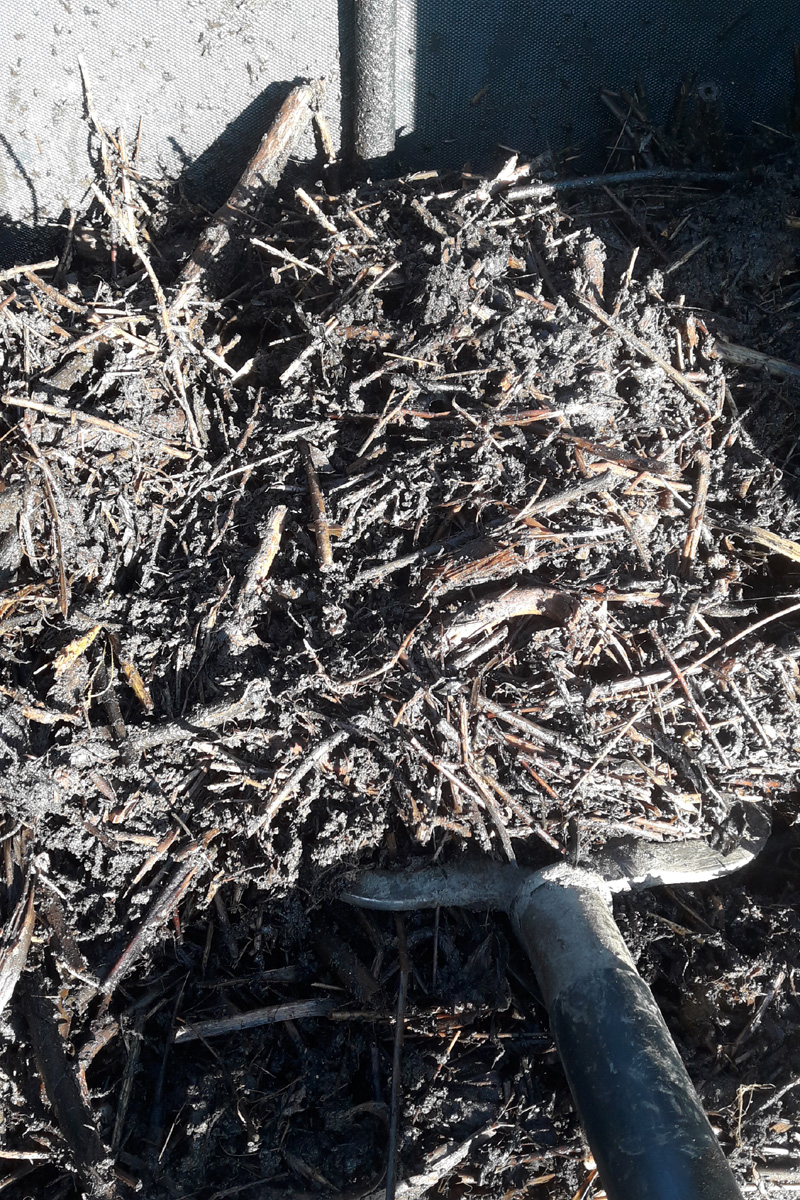 Yes, there’s still quite a lot of woody, twiggy material in there, but much of it was already quite fragile and crumbled easily. No ants this time, but plenty of worms, which is always good to see. Whilst I wouldn’t us this grade of compost for seed sowing, I’d be quite happy using it as a rough mulch, or at this time of year in particular, to add to a no-dig bed for incorporation over the winter. So that’s cuttings to usable mulch-compost in just six weeks, which is pretty impressive. For the time being though, I’ve added it to the control bin (as I did with the first batch) to allow it to continue to decompose until I need it, whilst I set up the Super Composter for another batch.

I’d been in touch with Tony at SoilFixer and he’d suggested that the lower-than-ideal temperatures – the bin should be reaching 60oC without too much trouble – could be down to an air-flow issue. He sent me four lengths of seep hose and suggested I install them in a lattice beneath the bin, ensuring the ends protruded from under the sides. This should allow air to be drawn up through the compost, helping oxygen to reach the hard-working bacteria and preventing the development of anaerobic conditions. I did as he suggested, and so this was what the bin looked like before I re-filled it: 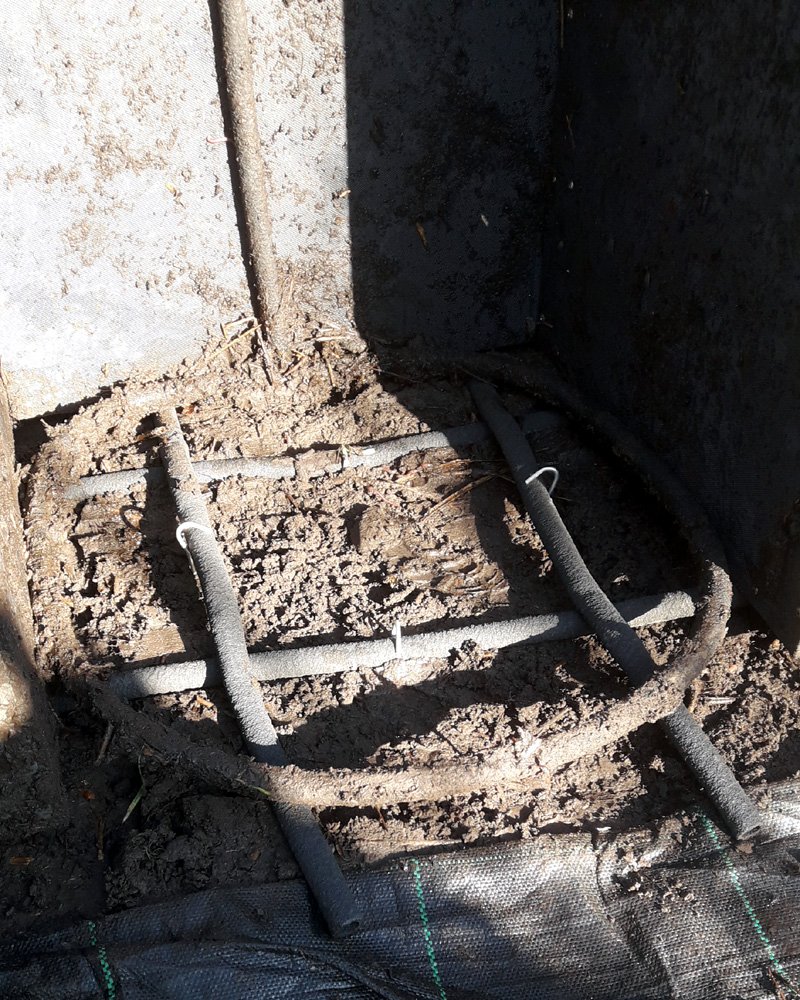 This time I decided to try a quick variation: I added a few inches of the previous batch back into the bottom of the bin to act as a starter; hopefully ensuring that bacteria and fungal hyphae get a good head-start on breaking down the new material. I also added another layer to the top of the bin once I’d filled it. Again, I used whatever was in the open compost bay, so a good mix of semi-composted and fresh green material. As there wasn’t quite enough there to fill the bin, I ripped up a spare patch of Nasturtium and cut back a couple of overly-large comfrey plants, cramming it all in and adding handfuls of Soilfixer’s biochar-based compost activator as I went. 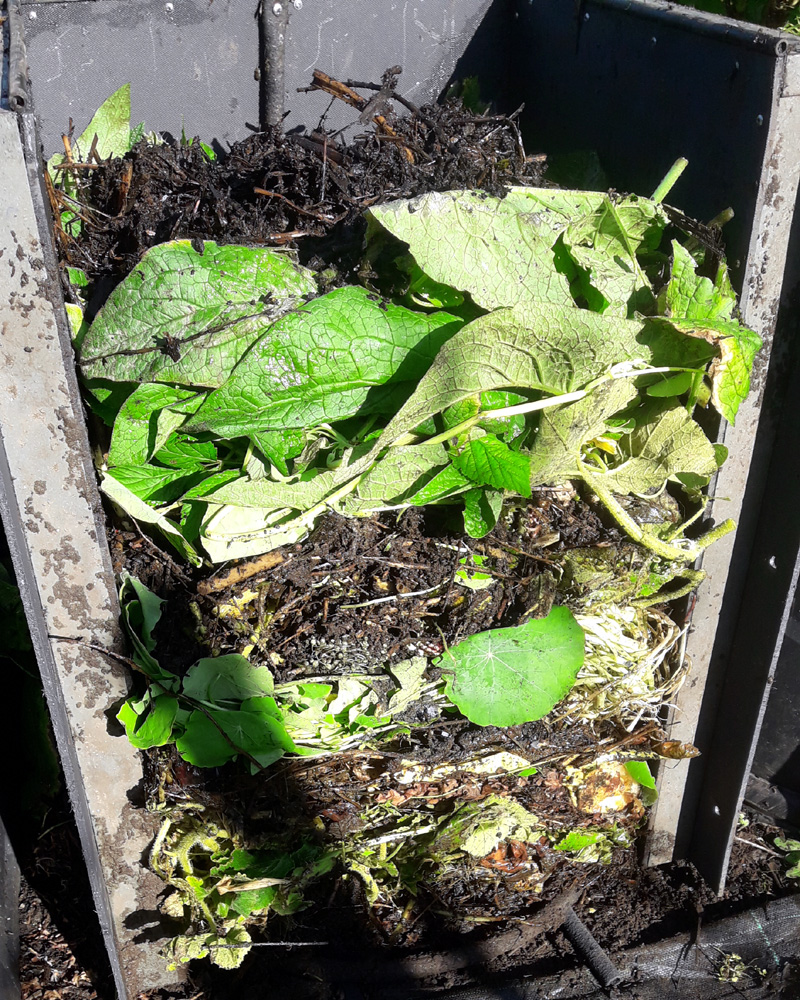 That’s the newly-filled bin: a nice-looking lasagne of fresh greens and semi-composted green-browns. Nothing too twiggy or solid in this batch, so I’m expecting it to break down quite quickly, although whether or not the lower ambient temperatures at this time of year will have much of an effect remains to be seen.

I’m planning to get down to the plot to check the temperature – which dropped down to 8oC for the new batch – in the next couple of days, but the weather forecast is pretty foul, so we’ll see what happens. In any case, I’ll leave this batch to work for another six to eight weeks, which will take us up to the end of November, and then see if there’s anything usable in there before winter sets in.

As always, I’ll keep you posted. Thanks for reading and if you have any questions or observations please feel free to post a comment below and I’ll get back to you as soon as I’m able to.