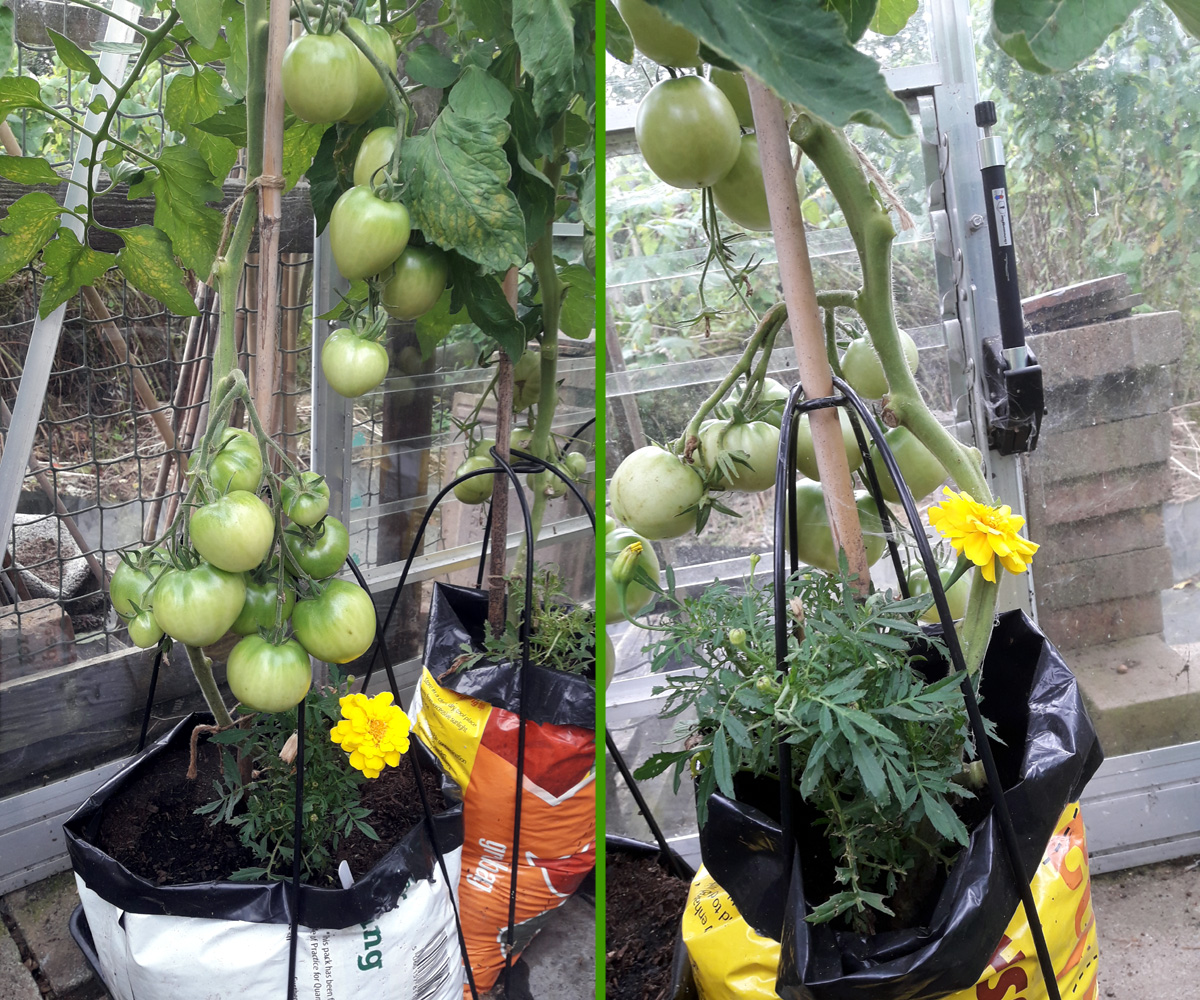 So far the ‘Maghrebi’ tomato plants have all been doing well. I’ve been watering them as regularly as I’m able, feeding them once or twice when it seemed like they might be flagging a little – but perhaps not as regularly as maybe I should, as you’ll see below). Moving into the end of August, with fruit forming up but not ripening quite yet time, I decided it was to start helping them along a little.

I started by trimming back the growing tips of the plants, both the top few inches of the main stem and the ends of all the foliage shoots. I then completely trimmed off a few of the lower leafy shoots from all four plants – keeping the amount of cutting-back as even and equal as possible. 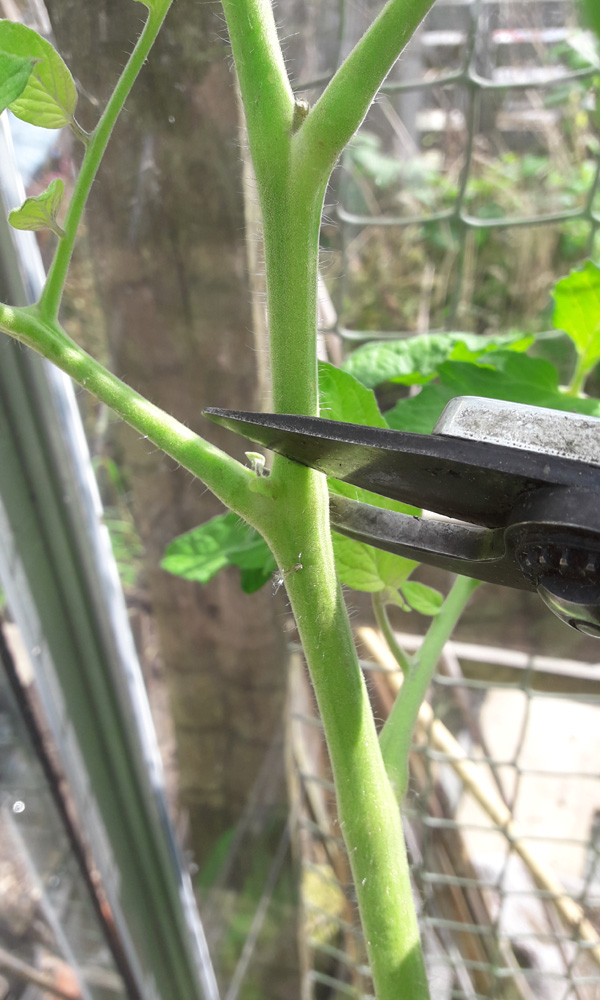 This is the general advice given to tomato growers in most books and magazines (and I think Carole mentioned it in this week’s episode of Beechgrove) and earlier this year, as part of my RHS Level 3 studies, I learned the science behind the plant’s response. The short version is that cutting back the growing tips removes the main sources of production of the plant growth regulator Auxin. Some of the main effects of this particular PGR include promoting the growth of stems, promoting fruit set and development, and inhibiting the effects of ethene.

The latter is the gaseous PGR that promotes fruit ripening and abscission (fruit and leaf drop). With ethene no longer inhibited, the gas is free to build up in the tomato fruits, causing them to change colour and sweeten. And as these plants have set all the fruit they’re likely to for this year, and in some cases the fruits are already bigger than they strictly need to be (see below) then that’s the result we’re looking for.

In the process of trimming back I checked the fruit and discovered that all was not well. For starters, a couple of trusses on one of the Bulrush-grown plants were showing clear signs of the dreaded blossom end rot: 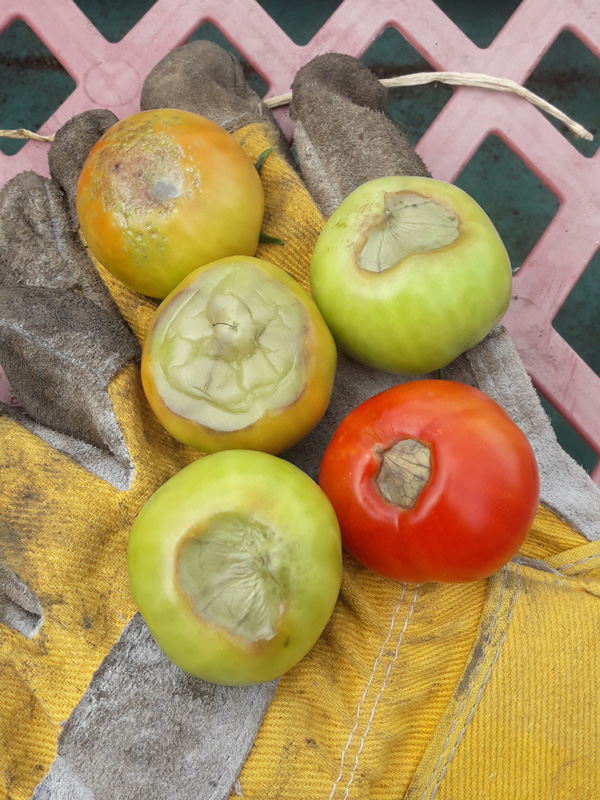 As that linked-to disorder profile from the British Tomato Growers Association (who should know a thing or two about toms) explains, it’s not caused by a fungal infection, rather a shortage of the essential mineral calcium. The shortage isn’t necessarily due to a lack of calcium in the growing medium, but is more than likely due to a lack of available moisture to carry the dissolved mineral up into the plant.

In this particular instance I can rule out one other potential cause – a high-nitrogen feed – as the only feed I’ve given the plants has been 50% higher in potassium than nitrogen (although apparently potassium, in turn, can interfere with the take-up of calcium, so maybe the feed played a part). But as I noted in my last update that the peat-based compost seemed to be retaining and holding less water than the peat-free, then I think we can point the finger in that direction. Obviously I have to take my share of the responsibility for not irrigating quite frequently enough, but in my defence I’ve been watering all the plants equally (and trying to avoid either waterlogging the growing medium or causing the fruit to split due to over-watering) and there’s no sign of blossom-end rot on the plants in the peat-free growbags.

Not that the peat-free plants have been completely without problems of their own though. As you can see from this pic, the plants grown in the SylvaGrow bags have shown clear and classic signs of interveinal chlorosis caused by magnesium deficiency: 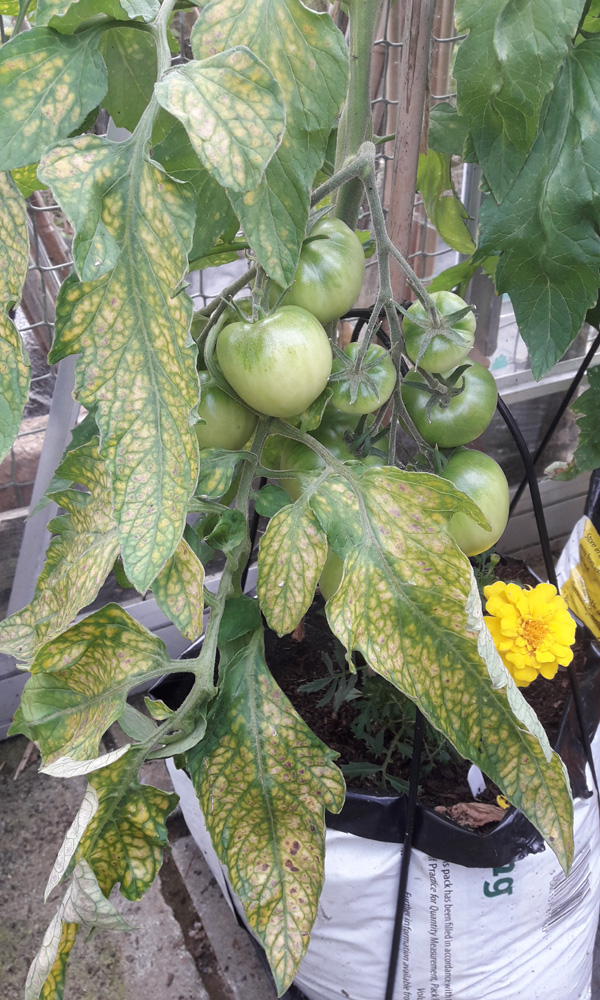 According to my RHS L3 textbook, magnesium is a common enough element and deficiencies are usually only found in intensively cropped sandy soils or chalky, or over-limed soils. I could have addressed the issue with dilute epsom salts, but as this sort of disorder usually appears in the older leaves first, and those were the ones I removed (as mentioned above), I’ve decided to let it lie for now rather than dose all four plants, possibly unnecessarily.

There was one other problem with both of the peat-free plants, which didn’t manifest until a couple of days after I’d trimmed everything back. This time it was a case of the plants being too successful at setting fruit for their own good. A whole truss of fruits had fallen off of each one, the weight of the fruits presumably being too much for the stem/truss joint to support. 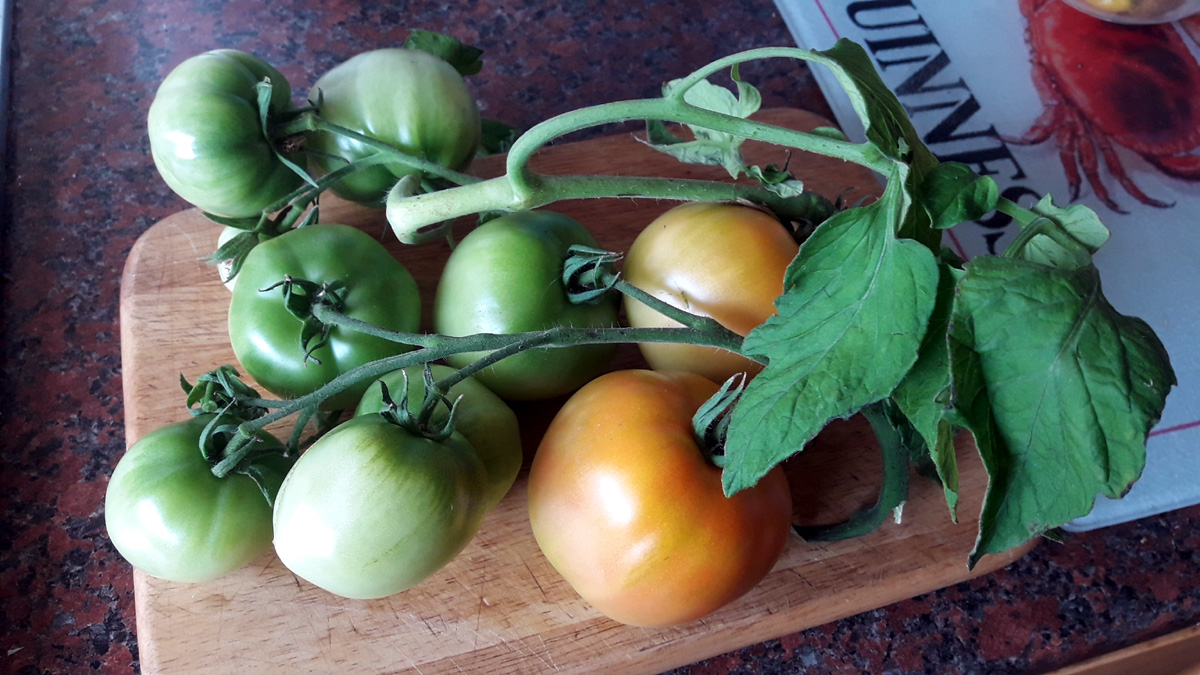 This is rather unfortunate, as it obviously affects the overall comparison of fruit yield and quality, but can’t be helped. I’ve recorded the weight of the fallen fruit and have put them in a bowl on a sunny windowsill, with an over-ripe banana, to see if a bit of extra ethene will help them towards ripening. Otherwise, that’s one batch of green tomato chutney already planned.

Hopefully in the next few weeks I’ll see a few fruits ripening up (preferably still on the plants) and will be able to start taste-testing and saving the seed to go back to the Heritage Seed Library. I’ll keep you posted.

How about you? Having a good year for tomatoes, or are yours late / unripe / diseased or disordered? Please do let me know, via the comments.

7 replies on “Growbag Trial Update: Fruit-Set, Ripening and a Disorder or Two”

My tomato plants this year are ‘Black Russian’ all grown from seed and standing outside. From 11 plants I have 2 large tomatos and 5 small ones, all unripe to date. A terrible crop. The plants themselves are healthy and green-leafed, smell wonderfully. Eight have been grown in pots and three in growbags. All watered to ensure not dryng out, all fed a potash feed once a week. Tops cut out to encourage fruit growth and bottom foliage cut off to aid ripening. All to no avail!! Has anyone else encountered troubles woth this variety? I will stick to Aisa Craig and Moneymaker in future, reliable croppers in other words.

Oh that’s a shame. My dad-in-law has grown Black Russian for years in his polytunnel and swears by them for reliable cropping. Sounds like you’ve been unlucky with a bad batch of seed, or maybe had a pollination problem.

Did you notice whether the plants were setting flower a few weeks back? If they did and the pollinators were busy elsewhere they might have gone over before they were fertilised. One other possibility is that the tops were cut out a bit too soon. That Auxin PGR I mentioned also helps fruit to set and develop, so if the tops came off before the fruits were set, the flow of Auxin might have stopped too soon and prevented fruit from setting properly.

That’s the problem with trying to diagnose plant problems though – so many variables, so many things that can potentially go awry.

Darren
Thanks for your reply. The plants were very slow to put flowers on, much slower than with the other varieties I have grown in the same space in the garden (with no pollination probelms). Then when they finally did flower the majority didnt develop the fruit, some flowers just browned and fell off. I am interested in your comment that it might be a bad batch of seed. They were bought from the internet and the plants themsleves fall into two distinct types, some having dark green larger leaves, the others having smaller, curlier lighter-coloured leaves. Almost as if it was a different variety. That sounds like seed to me. Another concern was that the seed packet advised not to pinch out side shoots and to grow like a bush variety. Did your father in law do that with his tomatoes? We have no trouble at all with blight, the plants are perfectly healthy, just very little fruit! Thanks again for your advice

Looking around on t’internet it seems Black Russian is an indeterminate or vine-type cultivar, which means you should be pinching out the side-shoots, yes. Blossom trusses should form from the main stem, which will continue to grow beyond the truss (which is what makes a plant ‘indeterminate’ as opposed to ‘determinate – or ‘bush type’ in the case of tomatoes – which would have trusses forming at the end of each main stem and side stem, with no onward stem growth beyond). So that was dodgy advice on the seed packet, unless everyone else has got it wrong.

When you say you bought the seeds from the Internet, was it from one of the regular, reputable seed suppliers or was it more of a cheap-and-cheerful ebay outfit? If the latter then it could be they’re from an amateur grower who hasn’t managed to keep the tomato strain true-to-type by isolating their plants, rather than a commercial seed supplier, who would have obtained their stock from a grower who can guarantee the cultivar, or developed their own seed stock in controlled conditions.

In either case though, poor pollination is usually due to a lack of pollinators – maybe you have so many other plants to choose from that the insects were just ignoring the toms – or bad weather killing off the blossom before they had a chance to be pollinated, or genetic variation resulting in a weaker plant, or perhaps something Auxin-related, as I mentioned before.

Best bet for next year might be try again with fresh seed from a good supplier – I tend to use the organic and/or specialist veg suppliers myself – and continue to pinch out side-shoots, but don’t trim back too much leafy growth, until the fruit seems to have set.

Hiya Darren, as I know you are an organic grower, I am interested to know what feed you used, which is: “50% higher in potassium than nitrogen”
Thank you, Andrew

I was using Green Future Organic Tomato Fertiliser, with an NPK rating of 4:1:6