This year I’m participating in a trial of the Super Composter hot-bin for the folks at SoilFixer. Last week I brought the first round of super composting to an end and set up for round two.

The story so far: I’ve been sent a Super Composter hot composting bin to test out, which I set up back in May. The initial load of compostable materials went in on a dull day at the beginning of June, and I’ve been keeping tabs on the temperature and general state of the bin since then.

By mid-July the temperature of the compost mix had steadily tailed off from around 30oC or so, down to around 16-18oC. I left it another month or so until I knew I’d have a couple of days in succession when I could get down to the plot to take measurements, and then decided to open up the Super Composter to see what we’d got.

End of Round One

Lifting the lid on August 20th, I started by checking the temperature in both the Super Composter and the control bin. 18oC in both – barely a couple of degrees above ambient air temperature on the day, suggesting that the main composting process was all-but done. 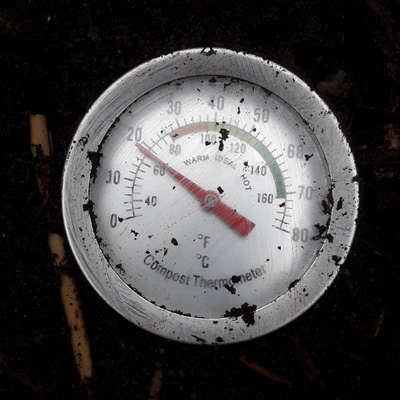 Here’s a look inside the two bins, showing just how much the level of the compost has dropped since they were filled back in May:

The Super Composter is on the left there, and the very fine-looking soil around the edges is the result of a colony of ants taking up residence and building themselves a nest complex inside the bin. Which meant the Super Composter perhaps had a slightly unfair advantage when it came to assessing the general state of the compost in each. So I tried to grab a sample from the centre of each bin, where the temperatures would have been highest for a rough comparison of the two:

The Results Are In…

As you can hopefully see, both of the bins had done a reasonable job of converting the bulk of the materials I added in May into something approaching usable compost. Both bins still had some fairly hefty chunks of woody material, but there was noticeably more of it in the control bin than the Super Composter. I’d say I’d be happy to use the Super Composter material as-is if I was rough-mulching a bed for the worms to break down over winter, but I wouldn’t want to try to use it as a seed compost. The control bin, not so much. Just too much wood, grass stem, large chunks of undigested material. More breakdown needed before I’d even want to use that as a rough-mulch.

So, to conclude round one: that’s three months of composting a mix of material that had already sat in a cold compost heap over winter and so was mostly browns, with some added greens, when it went into the bins. Maximum temperatures achieved during the first run: 32o in the Super Composter, 22oC in the control. If I’d been able to follow Tony at Soilfixer’s advice and shred the material before it went in then I’m sure those temperatures would have come up and the finished product would have been finer and more usable. But I don’t have a shredder – or a power supply at the plot to run it on – and I’m sure that’s likely to apply to the majority of potential allotment-based Super Composter users, so I still think it’s still a useful set of test-run results.

Here are a couple more shots of the Super Composter after I took the front off to empty the contents into the control bin (to finish off a bit more before I make use of it): 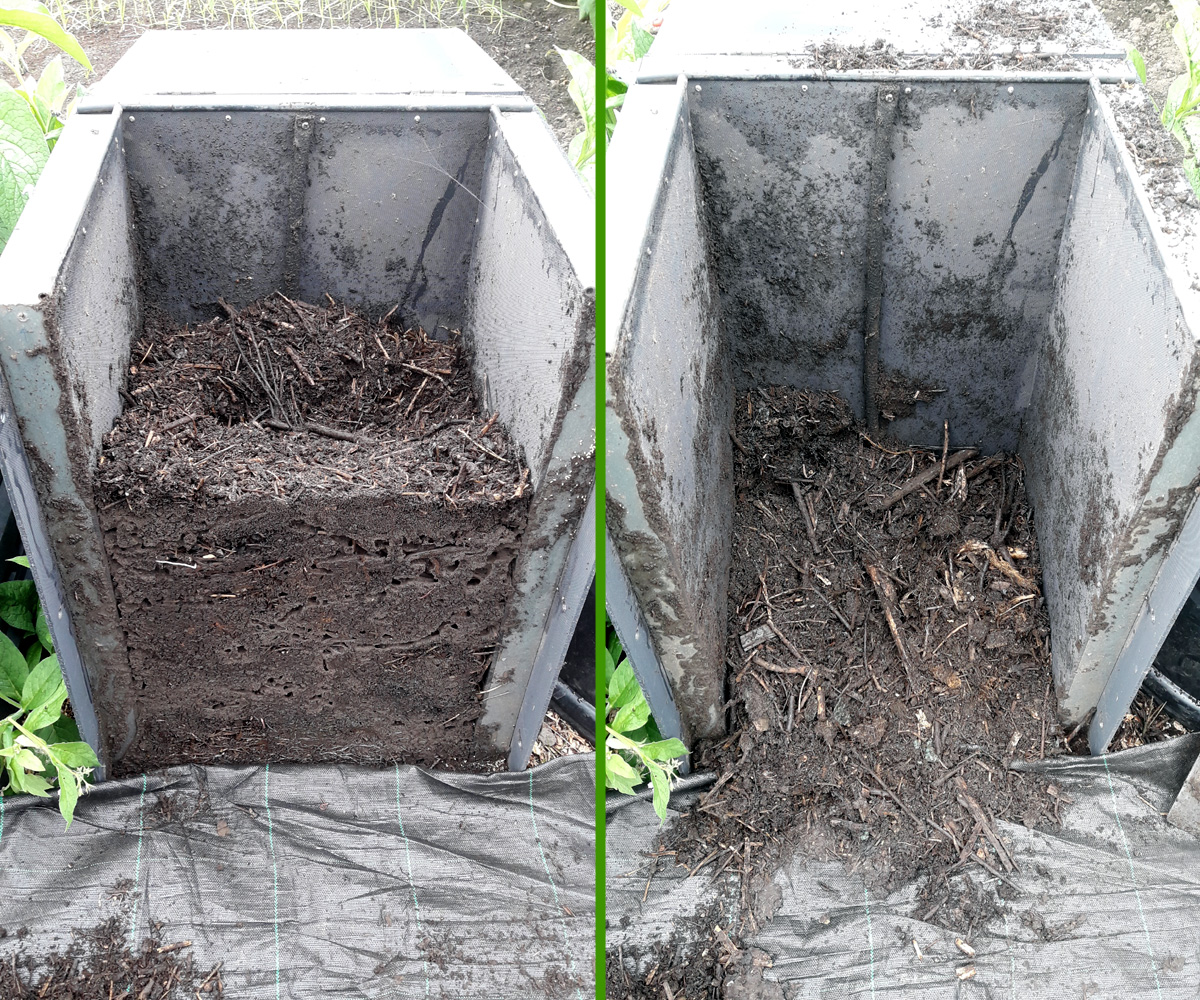 If you look closely at the pic on the left you can see the tunnel complex built by the ants (that was not a happy colony I can tell you, especially during their forced repatriation to the control bin) and on the right, some of the woody stems that had largely resisted decomposition.

Next up: refilling the bin with a fresh load of compostables. Once again, I used the contents of our cold compost bay, which contained three months’ worth of thoroughly assorted material from all over the plot: a real mixture of everything we’d cut back or pulled out of the ground since May; masses of rhubarb leaves, annual weed seedlings, dead pea and broad bean plants, potato haulms, onion scapes, fruit bush stems, lavender flower heads, you name it. Some of it was already part-rotted mostly-browns, but a lot of it far fresher, leafy greens. I’d say the overall mix was much closer to 50/50 than the last batch and I made an effort to mix it around a bit as I added it to the Super Composter. 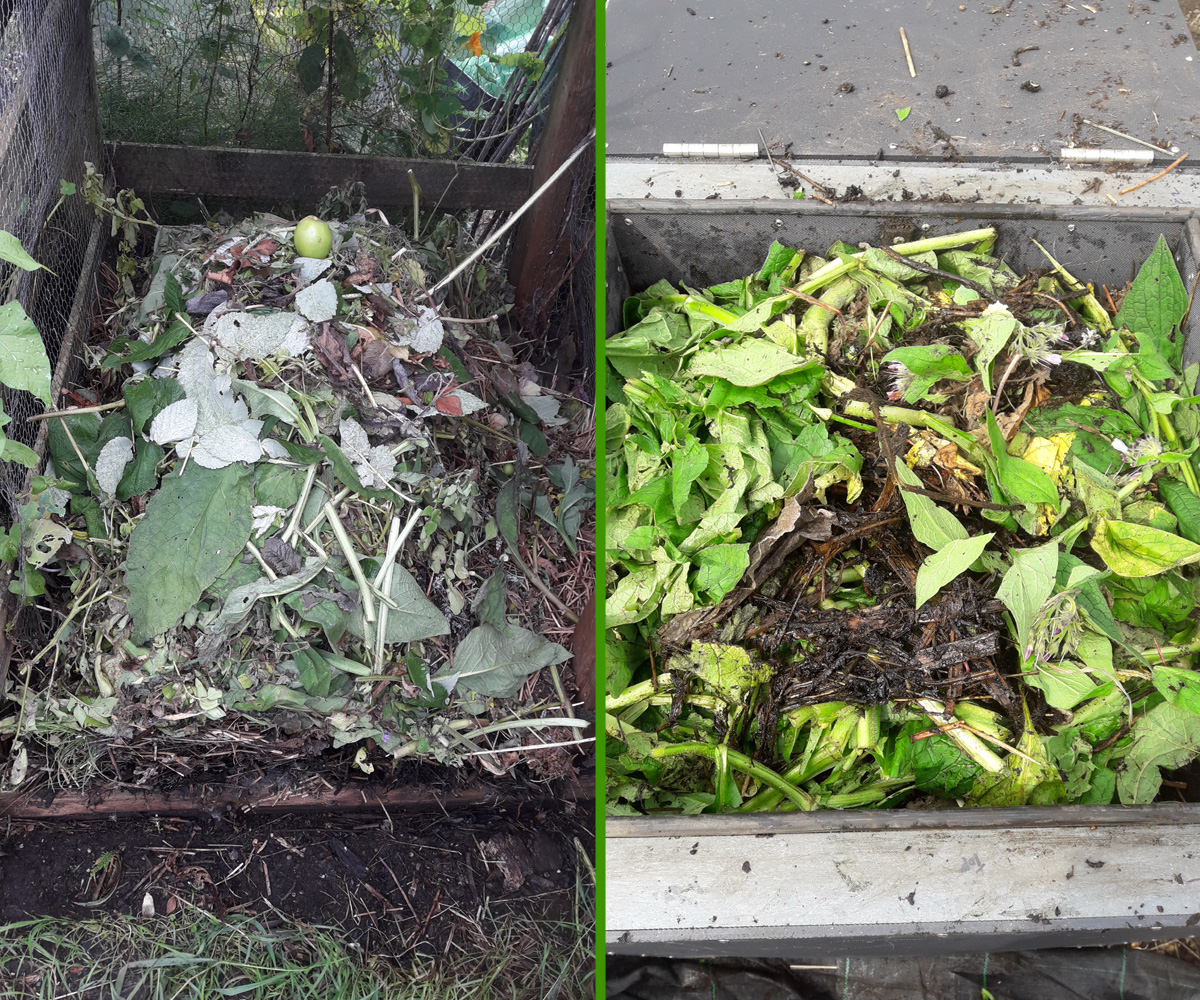 On the left there we have the contents of the compost bay and on the right the Super Composter re-filled to the brim and topped up with some freshly-cut comfrey leaves for good measure. I added a good double-handful of Soilfixer’s biochar-based compost activator on top of every quarter or so of the bin, which I reckoned added up to around the recommended spadeful per barrow-load. Once again there was no shredding involved, but Jo and I had been making more of an effort to chop everything into reasonably small chunks rather than chucking it all into the collection bay as-is.

I checked the temperature as soon as the bin was filled and sure enough it was bang on ambient, 16oC. 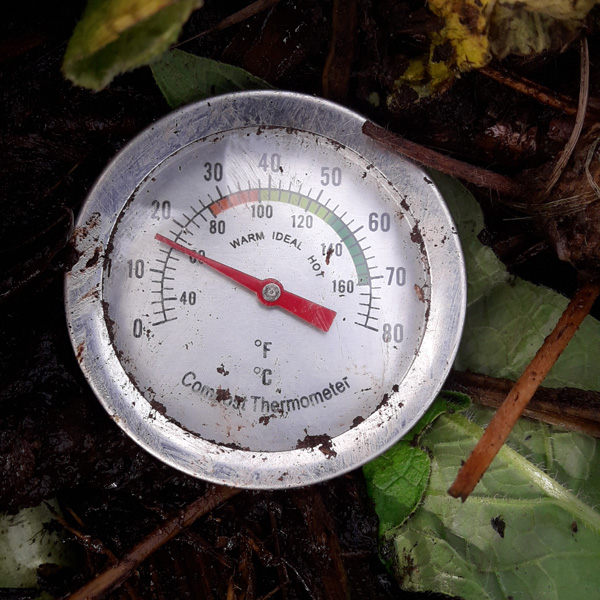 Over the next few days I kept tabs on the temperature gauge:

As you can see, two days after filling the bin the temperature had risen to 33oC, just topping the highest achieved on the first run. Another two days after that the temperature had hit 42oC, which is where it had remained when I checked yesterday. That’s still only two-thirds of the way towards the theoretical maximum of 60oC, but also around double the score achieved in the control bin on the previous run.

I haven’t set up another control bin for this second run, but I’m less interested in a comparison of the two – having established that the Super Composter temperatures are likely to be at least 50% to 100% higher than those found in a normal plastic compost bin – as I am in just seeing what sort of temperatures the Super Composter can achieve when I follow Soilfixer’s general advice and top the bin up roughly once a week with a fresh batch of compostables. I’m also interested in seeing how quickly the Super Composter can convert raw materials into usable compost: the target is around 6 weeks at maximum temperature, so I’m hoping that I’ll have something to show by the end of October (quite possibly with more help from the ants – they’re already showing signs of moving back in…)

Once again, I’ll keep you posted. Thank you for reading this lengthy update and if you have any questions or observations – particularly if you’re one of the other participants in the trial – then please feel free to post a comment below and I’ll get back to you as soon as I’m able.

Hi Darren…. great work. I have been running my bins alongside yours. My second clean set-up of greens also only got to 35C.
I stopped this after a week. Pulled it out and added a revised aeration pipe to see if this was limiting temperature. Bin with the revised pipe is now getting to 65C. So it looks like I need to pass this improvement on to all testers.
Do you have 2m of old soaker hose going spare on the allotment? If so I’ll send a diagram and you can revise the pipe. If not, I’ll have to cut a length and send it out with some simple instruction on how to amend.

Cheers Tony – I’m short on soaker hose, it’s not something I use on the plot due to (quite reasonable) rules to avoid hose-users hogging the water supply. If you have a spare section I’ll happily have a go at amending it though.