I’ve given up on growing garlic (for the time being at least) due to a few years’ poor results, but I am still growing elephant garlic. You can also buy elephant garlic (Allium ampeloprasum) as a garden ornamental, and it’s easy to see why: 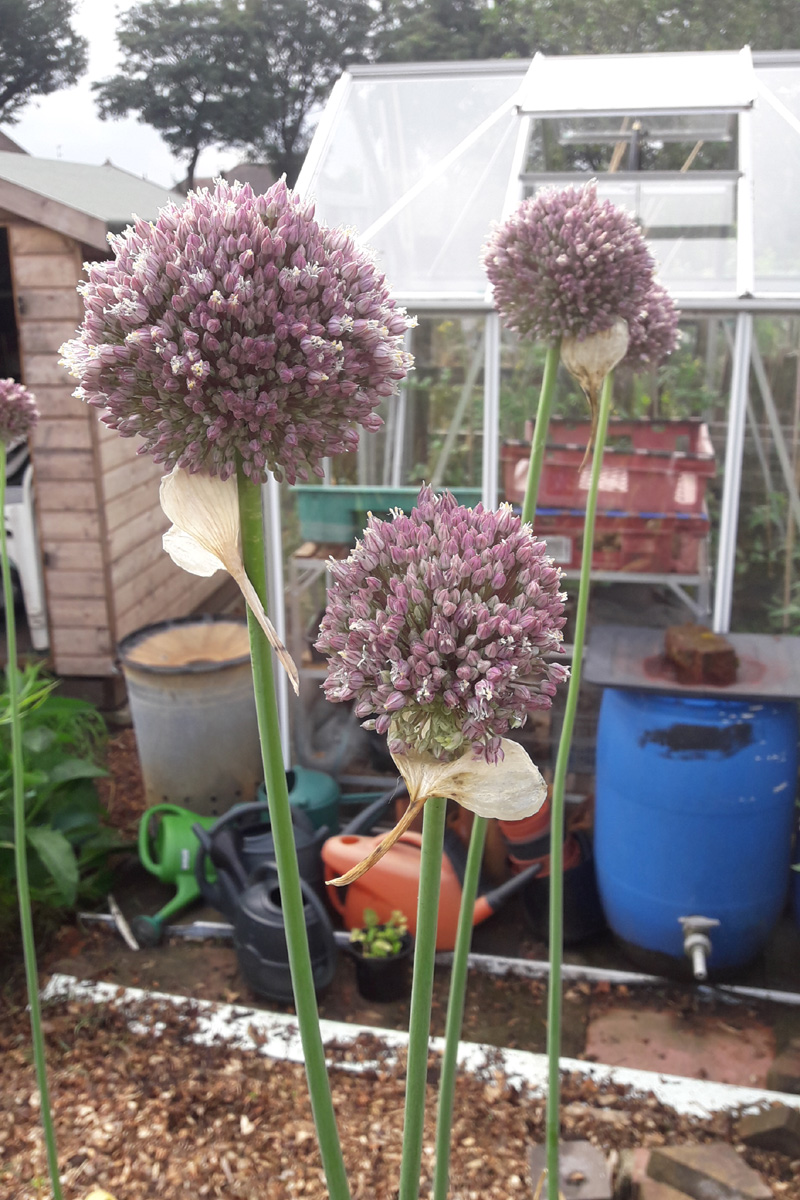 The received wisdom is that you should remove the flower stems – the scapes – as soon as you spot them, because the energy that the plant puts into the stem and flower won’t go into the bulb, and you’ll end up with smaller bulbs as a result. I’ve certainly seen onions wrecked by flower scapes, and leeks develop a tough, inedible central core when they flower, that makes them trickier to chop for cooking, but I wasn’t sure if the same would apply to elephant garlic.

Not being a big fan of blithely accepting received wisdom, I decided to run a small test last year. Of the 12 elephant garlic plants I grew, I de-scaped six and left the other six to flower. I then harvested and weighed the bulbs of both halves, and there was only 4 or 5 grams’ difference between the two batches, suggesting that there was no particular reduction in bulb-size as a result in flowering.

Thinking about it a bit more, the fact that the flower is held on a tall, bright green stem, and all green parts of the plant are photosynthetic, that means that there’s actually quite a lot of photosynthesis going on in a portion of the plant that’s lifted well above the leaf clump and away from other plants’ competing foliage. And as it’s the rate of photosynthesis that determines the amount of carbohydrates that are fixed and subsequently stored in the bulb, then if that green stem helps to fix more carbon than the carbon that’s consumed to fuel its growth, then it’s probably helping as much as it’s hindering when it comes to the overall growth of the plant and size of the bulb.

Plus, the flowers not only look great, but provide a good source of nectar for bees, and that’s always a win in my book. So this year, I left our entire patch of 12 to go to flower: 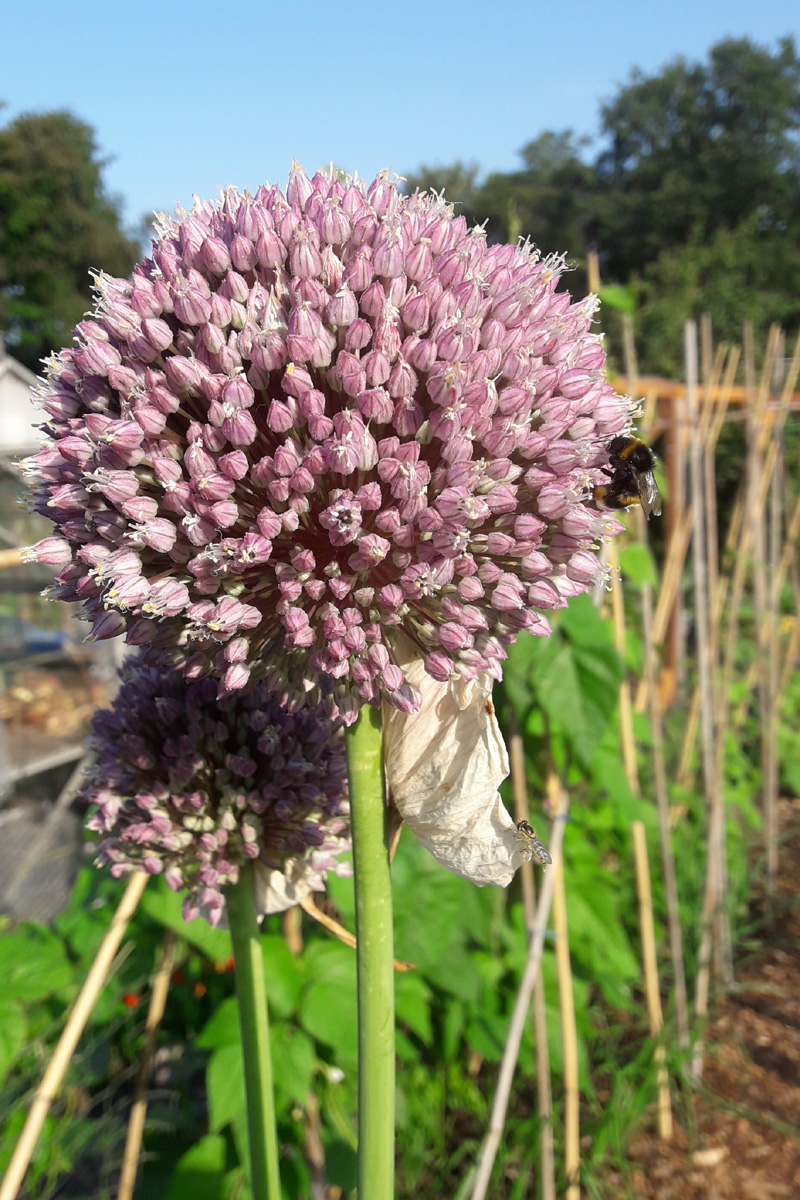 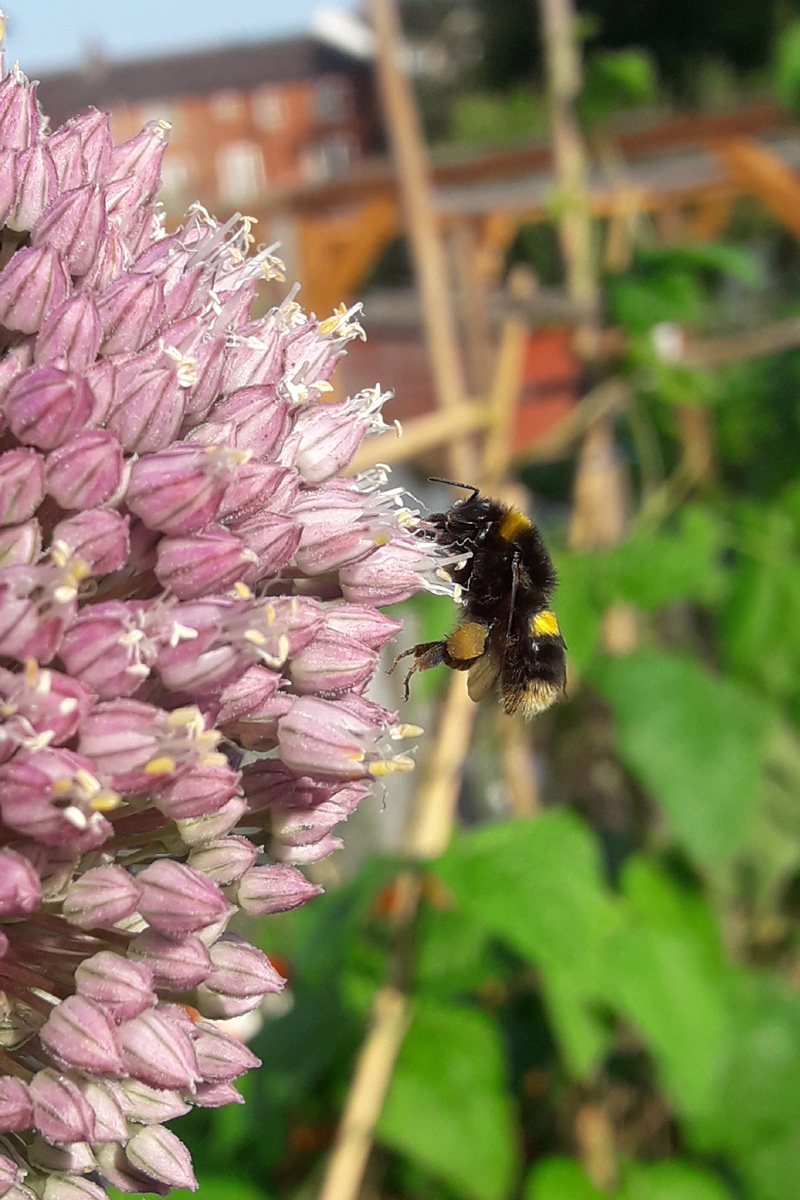 The only down-side is that we weren’t able to eat the garlic scapes this year, and they are rather tasty if you catch them young enough, before they stiffen and toughen up to support the weight of the flower head.

How about you? Do you de-scape your garlic and/or elephant garlic, or leave it as a bee-buffet? Let me know, via the comments.

I commend your inquisitive approach. As elephant garlic is a banker for us I am no longer going to fret about de-scaping them in future years. It could be the great descape(?). My practice has been to nip out any flowering stems as soon as I see them and not eat them, just compost them, as a. they are away at the allotment and don’t all appear at once and b. I don’t really know with confidence how to to prepare them.
Do you consider them to be like spring onions or asparagus. Raw, steamed, fried or any of the above?

Hi Mal, great to hear from you. I hope your plot’s doing well this year?

In the past we’ve nipped out the scapes once they reached a few inches long, and then treated them much like we do asparagus and griddling them until lightly charred. They’ve got a very mild garlic flavour that’s not at all over-powering and a bit of caramelisation really adds to it.

The test last year was quite small scale, just six samples on each side, but I’ll report back on this year’s crop. If it’s a little on the small side, then perhaps I’ll go back to de-scaping next year.