This growing season I’m trying out the Super Composter – a new hot composting system from the folks at SoilFixer – and having set up the Super Composter very quickly and easily at the weekend, today I filled both it and the control bin with the first load of compostables.

I deliberately waited a few days because, firstly, we had rain on Sunday and yesterday, and the compost material I was planning to use was a bit too dry, so the added moisture was welcome. I also wanted to wait for a dull day in order to take a baseline temperature for both the bins and compost materials, to better assess the impact of the bins on raising the temperature of the compost inside. 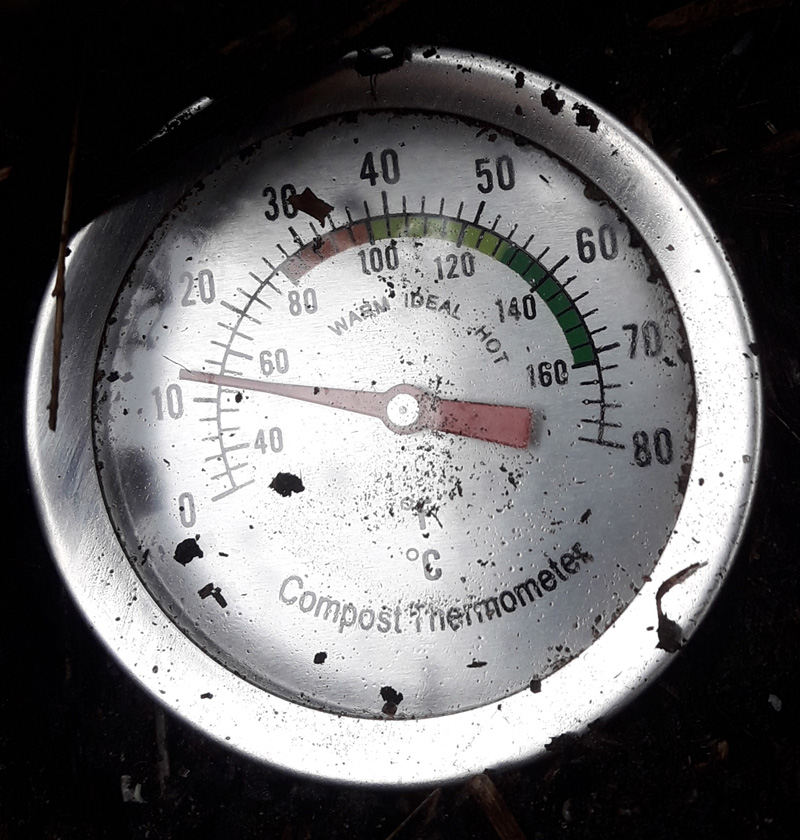 Using a cheap and cheerful compost gauge / probe that I bought online, I tested the temperature of the air inside and outside the bins, the soil – at a depth of around 6 inches – inside and outside, and the compost material that I was going to be loading them with.

Here’s what I recorded:

As you can see, on a dull day there’s very little difference between the temperatures inside and outside the bins. Perhaps a little heat was lost when I opened the lids of both to place the temperature gauge, but it probably wasn’t more than a degree or two.

The compost materials I’d earmarked for use have been sat in our compost bays for varying lengths of time. Some of it has been there since last Autumn, breaking down over winter. Some – including a fair number of rhubarb leaves – has been more recently added.

The instructions from SoilFixer call for the usual mix of greens and browns, ideally shredded. But as I don’t have a shredder, or a power source at the allotment, I’m using what I have. It’s mostly part-composted browns by now, so I also added chopped comfrey and stripped willow leaves, as well as some torn-up egg cartons – mainly because that’s the sort of thing I usually add to compost – and I will be adding fresh material to both bins at the same rate for each bin over the next few months.

As I mentioned, I took the temperature of the heap before I started digging anything out. I tested several areas and recorded temperatures ranging from 12oC – 15oC. This is why just piling everything up in a small heap constitutes ‘cold composting’ – any additional heat generated by the microbial activity within the heap quickly dissipates and so there’s never really much of a build-up beyond the surrounding air temperature. To get a decent heat doing, you either need a much bigger heap – turned and watered regularly and covered with insulating material – or, of course, a hot bin system.

To set up the Super Composter and the control bin, I started by taking as similar an amount of material from our compost bays as I could. The instructions said to add a shovelful of SoilFixer’s biochar-based compost activator for every wheelbarrow load of compostables. As I was using a spade rather than a shovel, I went with a level barrow-load. 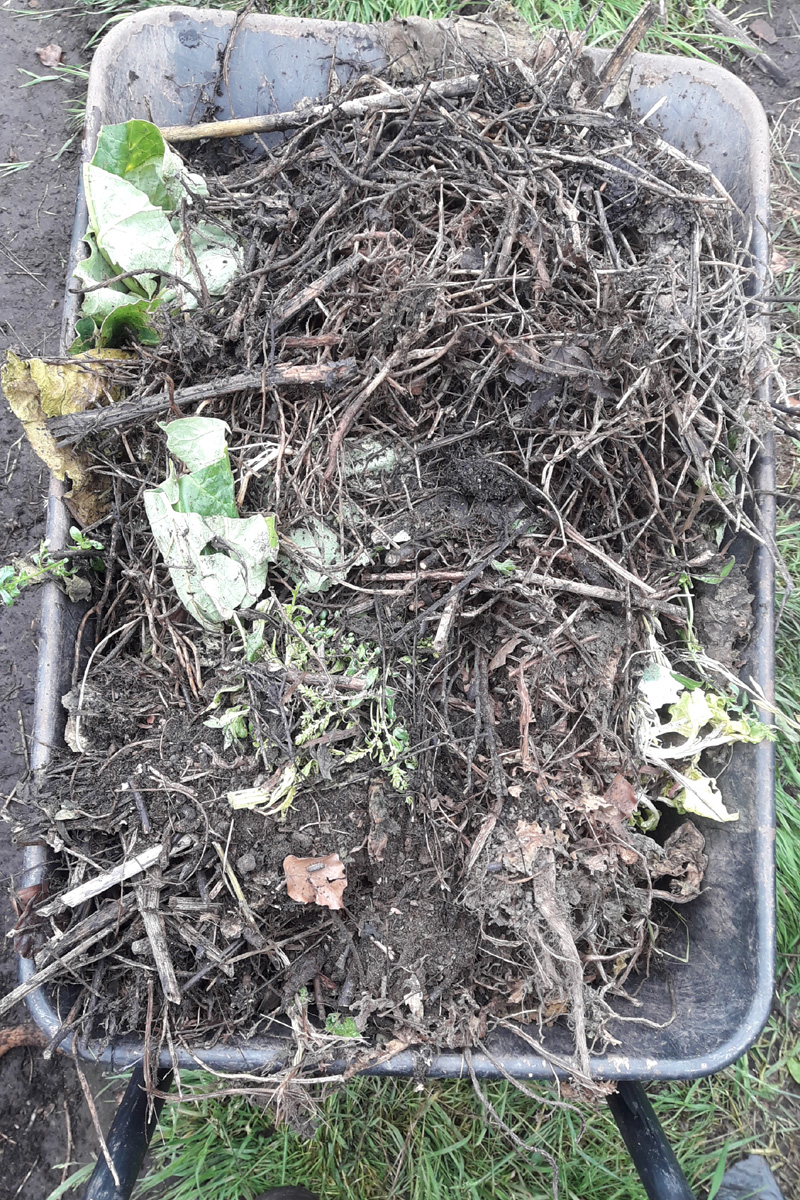 It took roughly three and a half barrowloads to fill the Super Composter. I sprinkled in a half-spadeful of compost accelerator after every half barrow-load. I added material to the control bin at the same rate – using material from roughly the same part of the source heaps and adding the same amount of comfrey, willow, and egg-boxes but no compost accelerator – and also added rain water to both bins during the process, around 25 litres to each.

Here are the two bins after three barrow-loads, Super Composter on the left and control bin on the right: 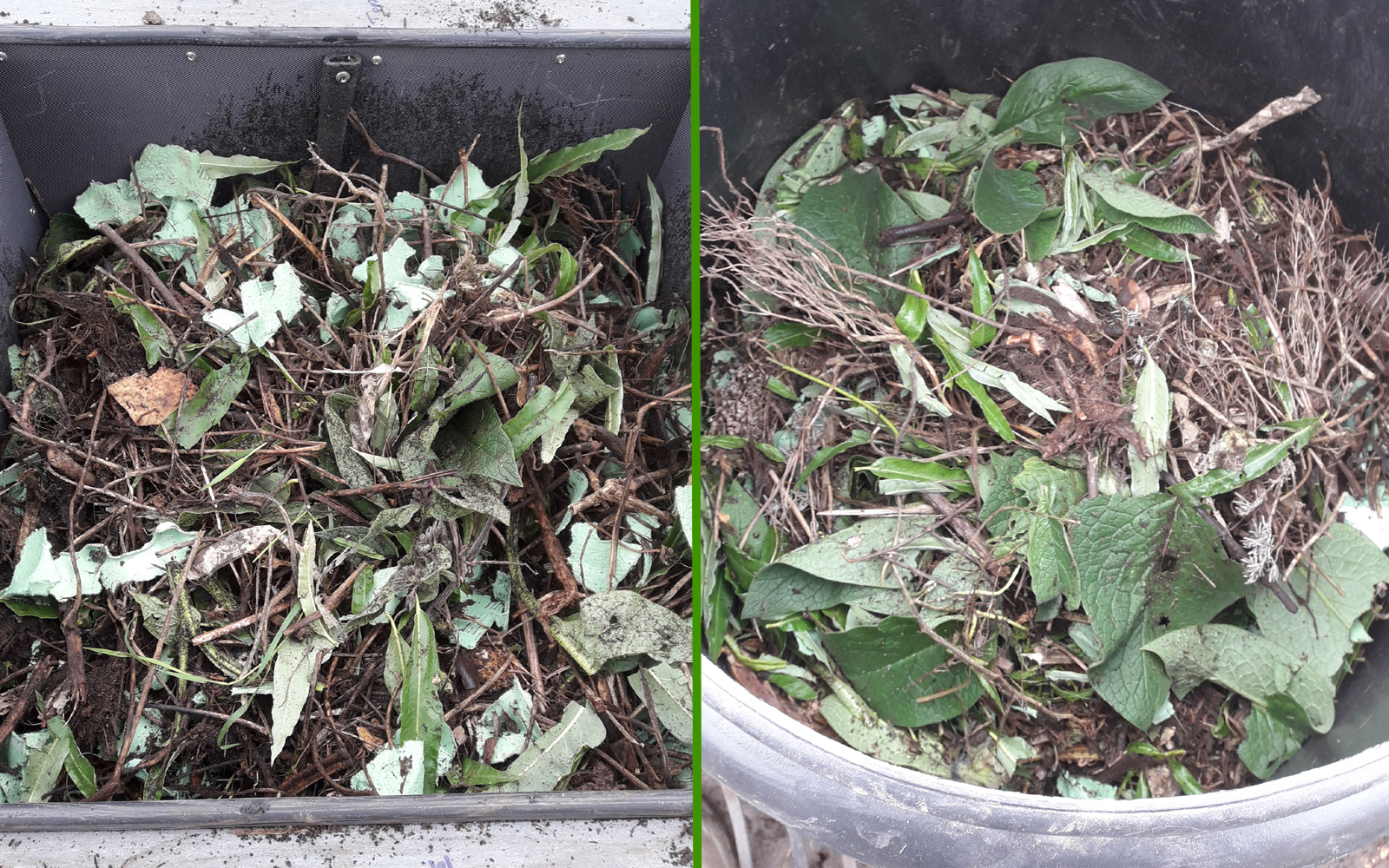 The next time I’ll be down at the allotment will be Sunday. The forecast between now and then isn’t great, so I don’t suppose the temperature will have increased much inside either bin, but I’ll check for the record. I’ll then continue to do the same at regular intervals, and also try to keep tabs on the amount by which the compostables in each bin have been reduced in volume. As I said, I’ll also add as similar amounts of fresh material to each bin as I can, recording when I do so.

Hopefully by the end of the process I’ll have a bin worth of lovely, colloidal humus-rich compost, just like the sample that SoilFixer sent along for reference (on the left, the pic on the right is the compost accelerator): 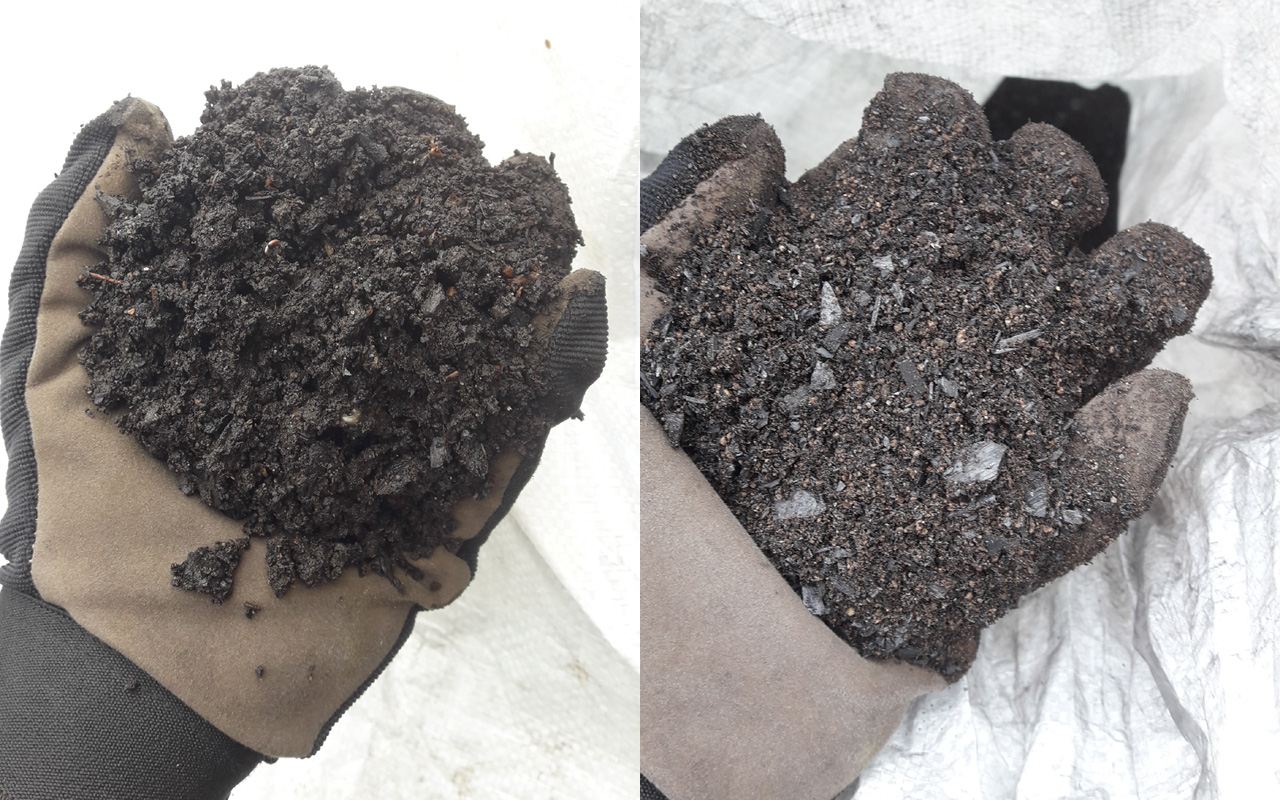 If hot composting, or just composting in general, is something you have an interest in then do stay tuned for further updates. And please do feel free to ask any questions, or make any observations, via the comments.

Hi Darren
Excellent feedback and detail log you are keeping…..

Has temperature got up to 60C?
If not, it might be down to how the aeration pipe (aka the soaker hose pipe!) has been set-up. You feedback not obvious where the pipes go. (This is logged as a design amendment). Do you have a bit of the pipe poking out under each wall?

I checked the air-tube and I had it wedged in around the base of the bin (as per the fourth pic in this earlier post) so I reached under and hooked it out. The bin is now sitting on the tube, creating a gap at the base, is that right? I can re-correct if not, but I might need a pic or two to refer to. (Also, having it like that means it’s no longer quite as stable as it rocks slightly from front-to-back…)