Over the past few years we’ve salvaged from skips, scrounged, been given, or even bought (just the one, as it happens) a handy selection of plastic compost bins. Here’s the current line-up: 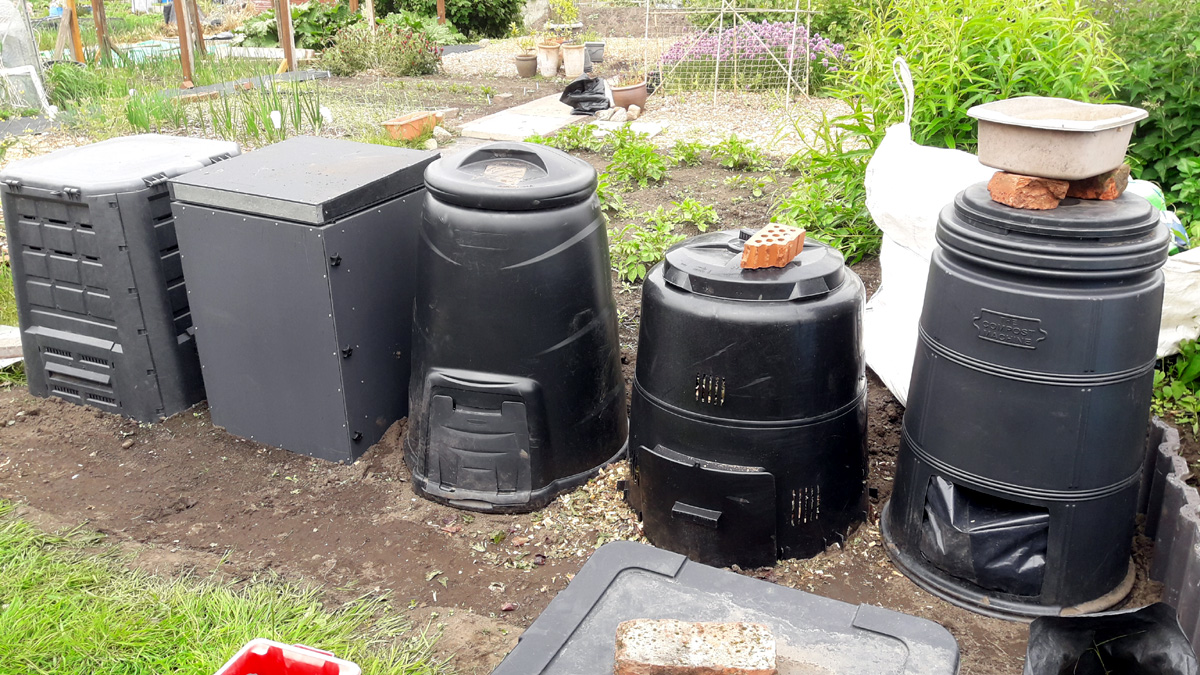 From L to R there’s our general purpose ‘chuck it in quick’ bin, the new ‘Super Composter’ hot composting bin that we’re trialling this year for the folks at SoilFixer, the ‘control’ bin that I’ll be using in the Super Composter trial, the bin that I’ve filled with leafy wood-chip to rot down and use as a growing mulch in a year or two, and the turf-stack bin that I use as a dump for any grass that I’ve had to lift from paths or areas where it’s snuck back in.

Not shown are the two timber and chicken-wire compost bays into which we chuck everything for an initial rot-down before it goes into one of the bins.

How about you? What’s your composting setup like? Tell me about it, via the comments.

At the school garden we have a wood pile, a wood and chickenwire ‘leafmould pen’, two daleks (one filling the other emptying) and a plastic anaerobic dustbin with a clamped on lid for ‘toxic waste’ e.g. couch grass, seedheads and the like. Most recently we have been donated a tumble bin. The biggest problem is rats and possibly badgers burrowing underground into the daleks. Contemplating a concrete stand to place the bins on.

That sounds like a great setup, Mal, I especially like the sound of the anaerobic bin. Is that one water-filled or just air-tight?

The concrete under the dalek bin should block the foragers, but it will probably slow the distribution of worms into and out of the bin – you might be better off diggind a trench around the bin and lining that with chicken wire, or something else that will deter diggers but welcome wrigglers.

It is airtight but also filled with water. Belt and braces. The contents recently got tipped into a pit underneath the runner bean wigwam. I don’t think anything will survive that, although you can’t rule out some seeds remaining viable. (I still exclude mare’s tail from even this process).

The concrete idea is a last resort. One dalek has a hard plastic base with holes in it. The other had chicken wire underneath it. The rats still got in. I think they eat the worms, because we don’t put any cooked foods, meat or fat into the bins. Either that or they just like a warm sheltered spot! I could live with it but because it is a school garden the exterminators were called in and the garden was shut for the duration.

Blimey, that’s one determined gang of rats. I suspect you’re right – they’re either looking for a warm nesting site or they’re eating the worms. Concrete might be the best option, then, or maybe cracked concrete to allow for a bit of drainage, avoid the compost getting too anaerobic down at the bottom?

We do have a dedicated ‘worm farm’ too so can introduce worms to churn the contents.

Ah, excellent. Superb setup all round 🙂