I think 2019 is shaping up to be the Year of the Aphid. It seems like the sap-sucking pests are everywhere at the moment: all over the Aqualegias in the back garden, on the onion seedlings in the greenhouse and in a particular nasty manifestation, infesting one or two of the trees in the Plot #79 allotment orchard.

A couple of weeks ago I spotted that the damson tree had become infested with aphids, but a population of ladybirds had moved in and seemed to be feeding on them quite happily. I waited and observed: the problem didn’t seem to be getting much worse, so I didn’t take remedial action. But then I got back from a three day visit to the in-laws last week to be told by another plot holder that the tree was in desperate trouble and was probably a week away from dying…

I checked, and had to agree: the problem had gotten a whole lot worse than the ladybirds could clear up on their own. All the tree’s new growth was badly affected, with the aphid population fast outstripping their predators. Only one thing for it; Jo and I (mostly Jo) had to de-foilate the entire tree (luckily it’s still a small one) and destroy all the leaves (rescuing as many ladybirds as we could spot on the process). This will hopefully wipe out the aphid colony and give the tree a chance to re-grow some leaves and recover its health. We’ll be feeding and watering it regularly for the rest of the season and keeping our fingers firmly crossed.

So, with the sobering example above in mind, here’s how to spot, double-check for and (hopefully) deal with an aphid attack on your fruit trees before it gets out of hand.

The classic danger sign is badly curled or folded-over leaves. This is caused by the aphids sucking the sap from the leaf tissues, leading to dehydration and structural collapse. 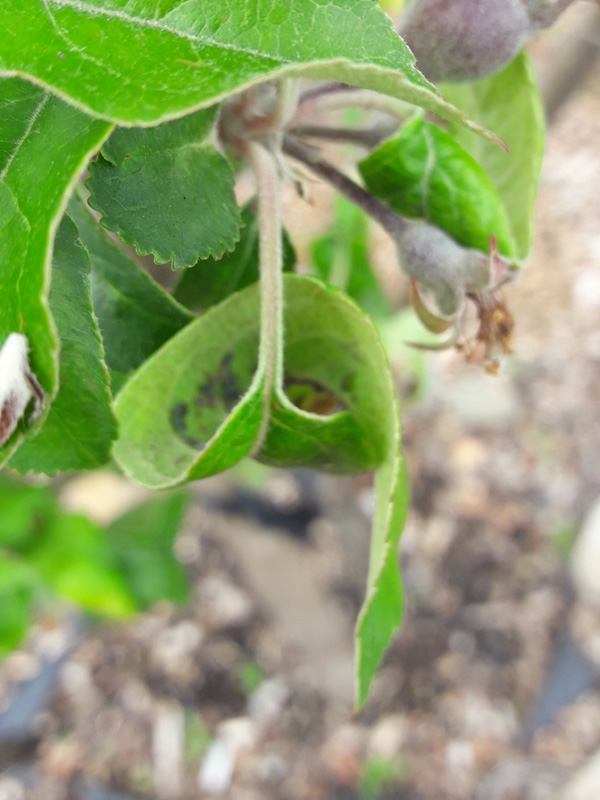 Once you think you’ve found an infestation location it’s worth double-checking, bearing in mind that on some orchard trees the brand new leaves may emerge from the bud tightly curled and take some time to grow out to their full extent. Gently un-curling a suspect leaf will quickly reveal whether or not you have a problem: 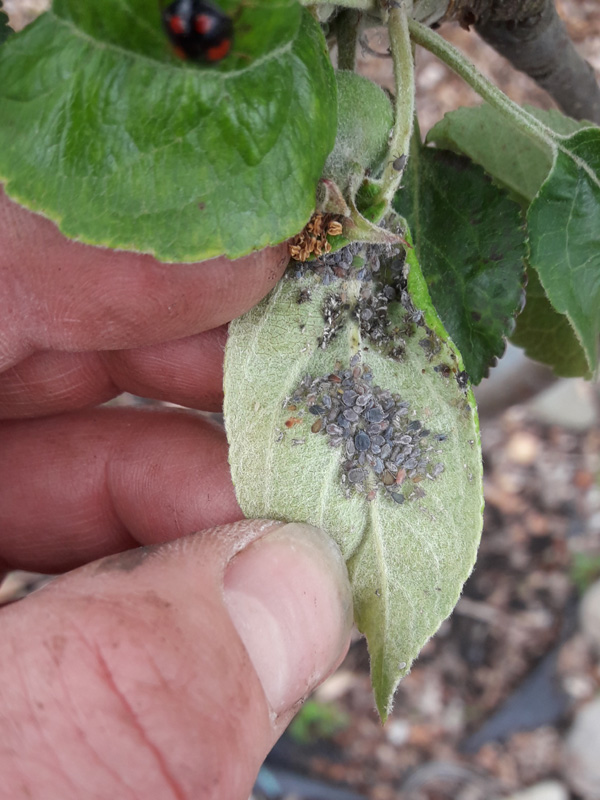 Regular checks are the best early-warning system. You might just get lucky and spot a problem before it starts to spread, like I did with this plum leaf. It had one slightly curled edge, but the underside was thick with an aphid colony that, thankfully, didn’t seem to have spread to neighbouring leaves yet: 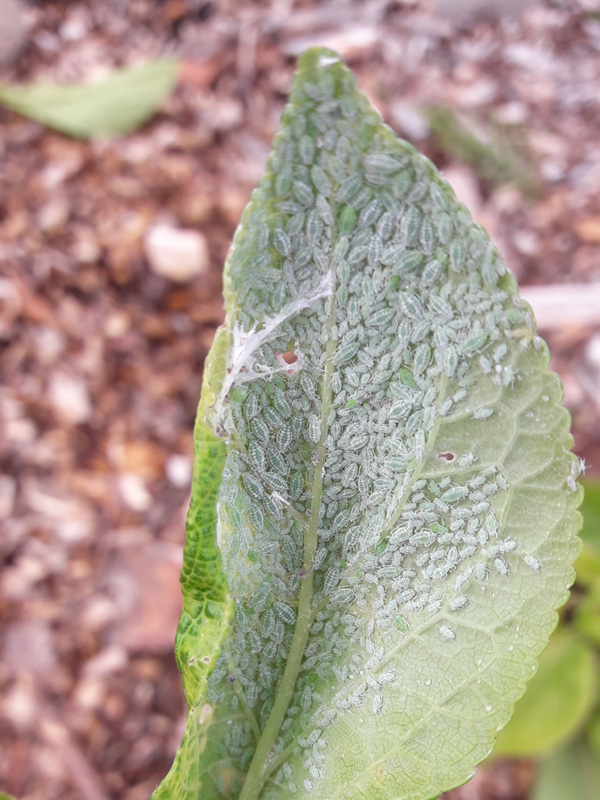 Another warning sign, although not one I could see when I checked the other day, is ants moving up and down the trunk of the tree and into the branches. Ants eat the sticky residue called honeydew that’s excreted by aphids – it’s the excess sugars from the high-pressure sap that the little sap-suckers can’t digest quickly enough – and some species of ants will ‘farm’ colonies of aphids, protecting them from predators as a means of safeguarding their food source.

Keep an Eye Out for the Good Guys

Speaking of aphid predators, one of the main weapons on your anti-aphid arsenal – and therefore another potential early warning sign – is the lovely ladybird. 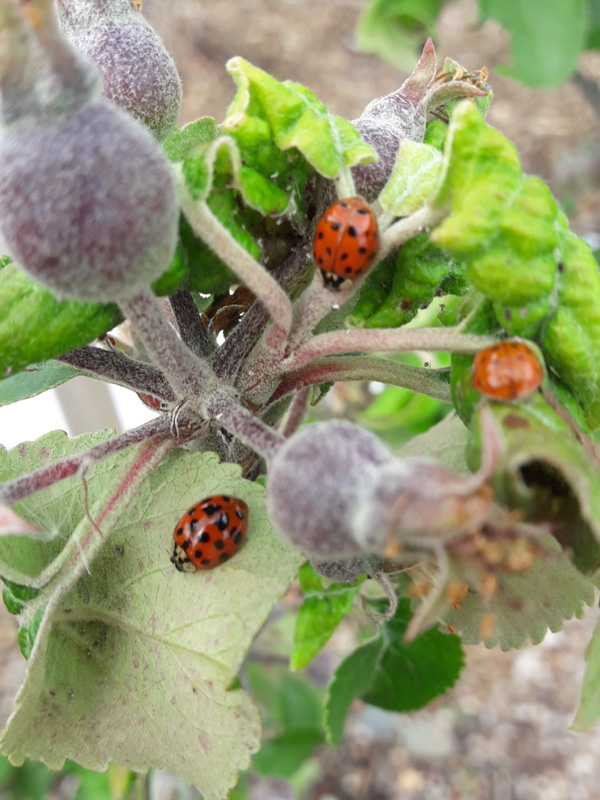 If you spot unusually large numbers of them on your trees then that’s often a sign that they’ve found have a regular food source to prey on and you should start checking for those curled-up leaves.

Don’t worry if you spot one of these wee beasties in the foliage: 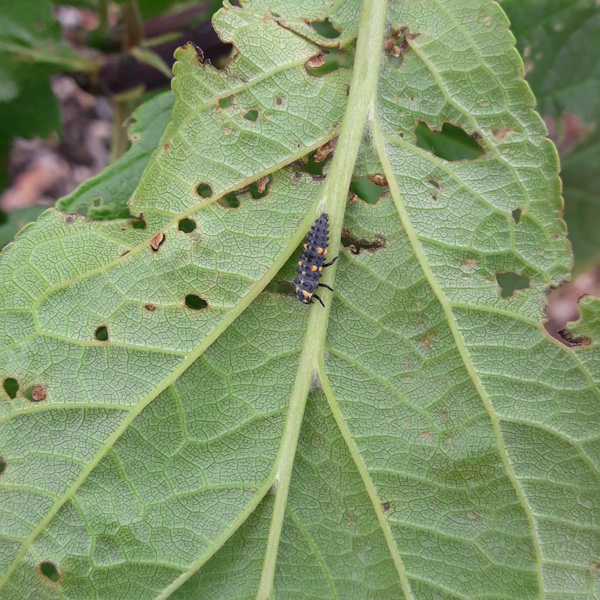 That’s a ladybird larvae and I’m sure I read somewhere that if anything they’re likely to be even more ravenous than the adults. And going back a life-cycle stage further, don’t worry if you see this sort of thing, either: 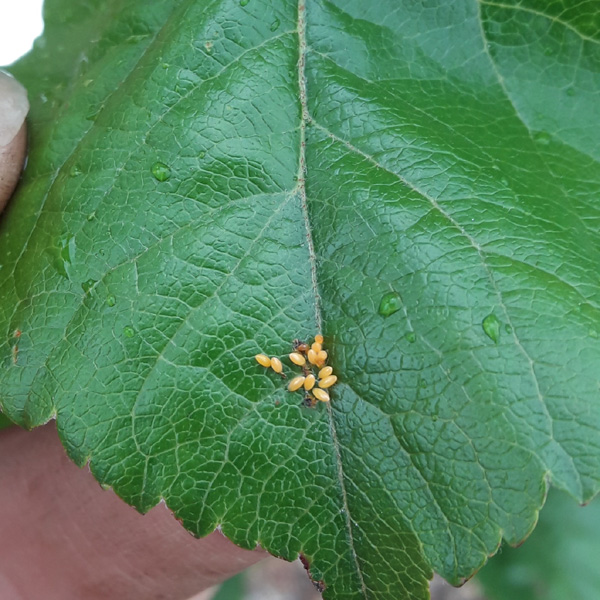 Those are ladybird eggs, the next generation of larvae waiting to emerge and get crunching. Aphids do lay eggs, in order to survive over the winter, but they’re much smaller and black in colour – the real problem is that they give birth to live young at a distressing rate, which is why a small colony can quickly become a major nightmare – so you’ll never be protecting the aphid population by leaving these orange dots in place, quite the opposite.

What to Do About Aphids?

The best remedy is to either leave it to nature and hope the ladybird population grows quickly enough to slow the aphids in their tracks – a potentially risky strategy, as per our poor old damson – or to nip off any affected leaves as soon as you spot them. Dispose of them in the council waste, or burn them. Don’t add them to your compost bin, where the aphids might just find enough fresh food to keep their numbers going long enough for the adults to develop to the winged-insect stage and fly off to infect another plant.

Spraying – with an organic, plant-oil based solution, which will block the aphids’ spiracles (breathing holes) and suffocate them – only really works on small affected areas and at the very early stages of an infestation. This is for the simple reason that the spray has to contact and ideally coat the insect to have a full effect, and if the aphids are already nestled within a tightly-curled leaf then the spray just isn’t going to reach it, not unless you uncurl every affected leaf and spray each one individually.

As for toxic chemical sprays – let’s just agree to not even go there. As an Organic gardener, I won’t condone what amounts to the nuclear option. Such sprays are indiscriminate and will kill any other beneficial, aphid-eating insects – ladybirds, lacewings etc. – that they contact in the process of killing the aphids. And it’s the ‘spray first, worry about it later’ mentality of the past 60 or so years that has led to a drastic decline in pollinator insect populations and warnings of widespread ecological and food chain collapse within the next 30.

Hopefully, if you do spot an aphid infestation and take action early enough then you won’t have to take the sort of drastic remedial measures that we did. Poor little damson tree. Here’s hoping it survives and thrives for years to come… 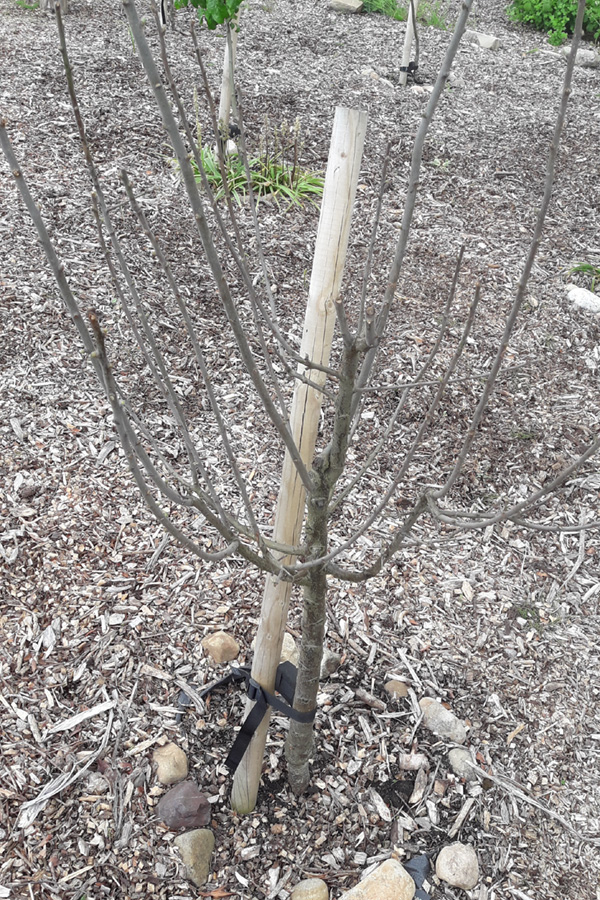 2 replies on “How To: (Hopefully) Prevent an Orchard Aphid Nightmare”

We had plum curl aphid problem some years ago and since sprayed in late winter with a winter wash which has certainly helped. We found that our trees leafed up in summer after our infestations. We find lots of birds browse the trees too and seem to be plucking off aphids.

Thanks Sue, I’ll check for an organic winter wash, see what I can find. I was hoping for more birds myself, but our site isn’t all that bird-intensive, unless they’re pigeons (more likely to damage the trees than the aphids) or the occasional robin…