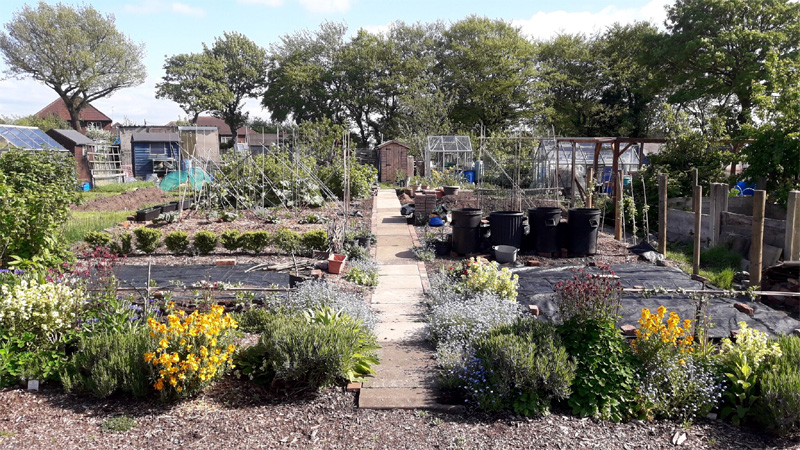 We’ve had a soggy old start to the month, but never mind. The ground could do with a soaking, and there’s drier weather ahead, according to the forecast.

Here’s our general action plan for May, once the weather sorts itself out a bit.

April was a very good month, if typically schizophrenic on the weather front, with a cold snap to start, a heatwave in the middle and a more rounded average to finish.

Down on Plot #59 our asparagus started coming up – it’s year three, so we’re finally harvesting at will – and our late variety rhubarb likewise. This year’s spuds are in the ground, and we’ve direct-sown a couple of rows of beetroot, more parsnips and carrots.

We got a lot of infrastructure work done in April, mainly emptying out and re-locating our four (scavenged and/or recycled) black plastic compost bins, spreading the usable contents on the bean and squash beds, and generally making the place look a bit more organised. I even got round to spraying down the greenhouse with Citrox, at long last.

The assorted trees in our developing orchard have been smothered in blossom at various points in the month. If similar volumes of fruit-set follow we’re going to have to do some fruitlet thinning this year, to avoid over-stressing the young trees.

Back home in the main greenhouse we’ve been sowing, pricking out, potting on and watering on a regular basis. The chillis that were sown back in January are growing strongly, our tomatoes have recovered from the shock some idiot (>waves&;lt;) gave them when he forgot to harden them off whilst potting them up, and we have trays and trays of onion seedlings after a bout of overly-cautious over-sowing due to the seed being a couple of years old.

How about you? Is May shaping up to be your busiest month of the year already, or is it the quiet before the June and July storm? Let us know, via the comments…