One thing Jo and I have definitely learned over the last 5 or so years of growing our own fruit and veg from seed: sowing too early rarely rewards you with the early crops you’re hoping for, unless you’re very lucky, or have a very good propagation setup.

Yes, it’s tempting to get going just as soon as the seed packets say you can. Then there’s the thrill of seeing the first bright flash of green as the seed-leaves break through the surface of the compost, and when those seedlings reach out into the world it really feels like spring has sprung.

Until, that is, the weather takes a turn for the worse, light levels plummet and your poor, light-starved seedlings go into a frenzy of elongated growth as they twist and turn desperately towards the nearest source of illumination.

The technical term for this is etiolation and the characteristically scrawny, over-stretched stems, barely able to support the weight of the few under-nourished leaves, are unlikely to live long or prosper.

I’m sure you know what etiolation looks like, but just to prove that I’m as guilty as the next grower of not always getting it right, here’s a shot from my own rogue’s gallery, taken not 10 minutes ago: 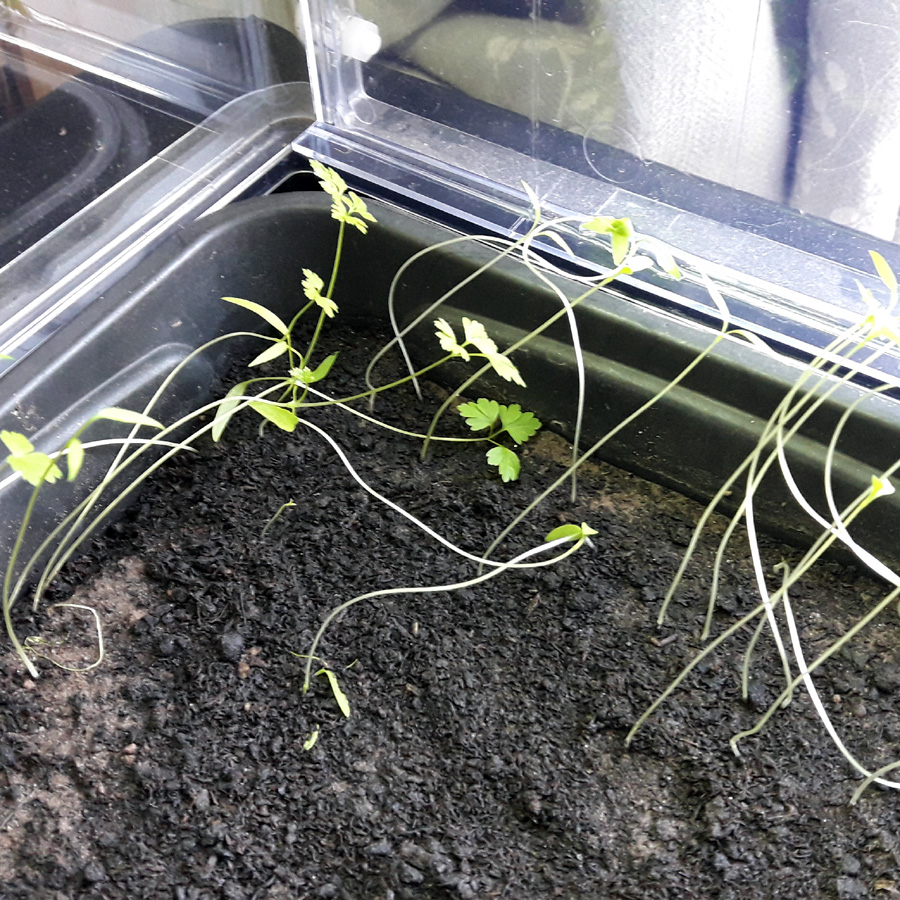 These poor parsley seedlings are having a terrible time of it. I sowed them early on the off-change they’d be able to grow on in a windowsill tray, but they got out of hand before I could prick them out and move them on. Game over for these plants; they’re already too poor to be worth saving, and given how many parsley seeds you get in a packet, I’ll be better off re-sowing at a later date, when the weather is clement enough to start them off in the greenhouse rather than indoors.

By contrast, here are a few young chilli plants that are doing rather well, if I do say so myself: 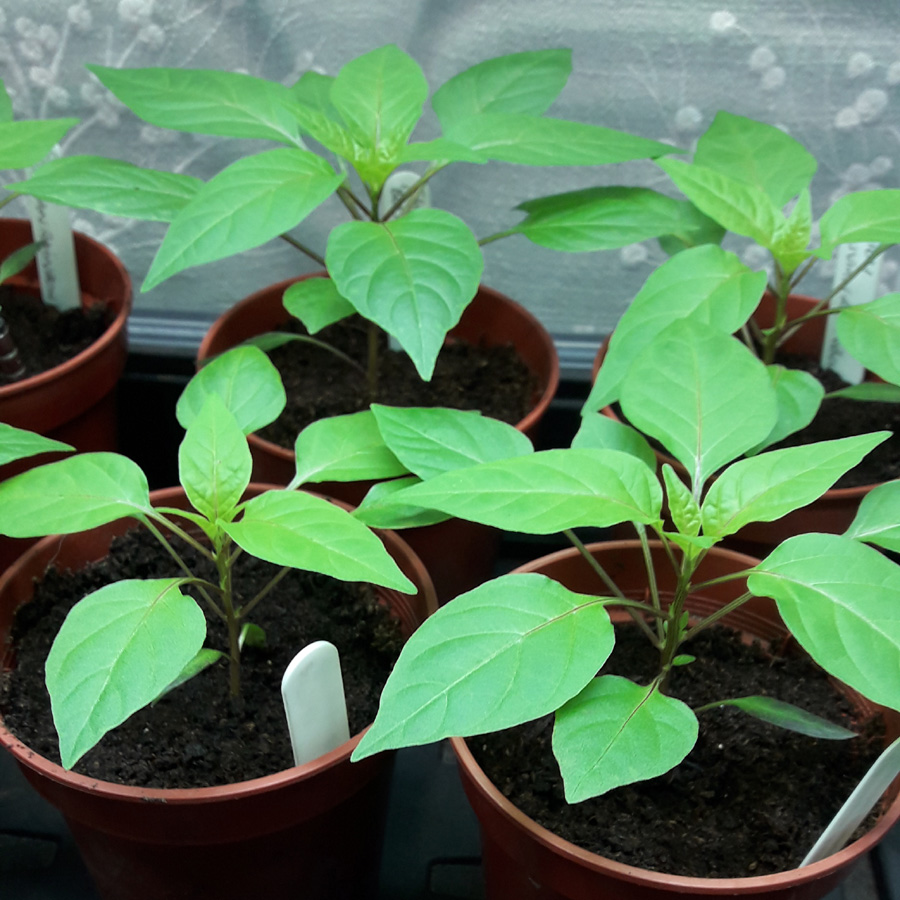 These plants have had completely the opposite treatment. Mollycoddled from start to finish, they were sown two months ago today and have spent their entire lives to-date in the cosy environs of a heated propagator, with a full-spectrum LED grow-light eight inches or so above their leaves.

The results are clear to see: no filters or Photoshoppery (size-cropping aside) has been used on that pic. They really are that green and fresh-looking, leaves packed full of photosynthetic chlorophyll and arranged in almost perfect symmetry around the stem to catch the maximum possible life-giving light.

They’ll stay where they are, along with four plants of a second chilli cultivar that’s a few weeks behind, until the propagator is desperately needed by something else, or the nights are warm enough to move them to our unheated greenhouse and pot them on.

In between those two extremes, I’ve got some – much hardier – broad beans that were sown, germinated and are growing on slowly but happily in the greenhouse. And a few trays of leeks and onions – including pricked-out potato onions – that were germinated indoors at room temperature, then taken out to the greenhouse for more light, albeit at a lower temperature, as soon as their green tips showed.

I’ve also sown three varieties of tomatoes today – they’re in the heated propagator as well, as I’d like them to grow into strong plantlets before I prick them out of their seed trays – and some radish, which should germinate and grow on in the greenhouse quite happily until they’re ready to harvest.

And that’s about it for early sowings, except for parsnip which I’ll be direct-sowing down at Plot #59 just as soon as the ground dries out and warms up a bit. Oh, ans I might try to start a few patty-pan type squashes off before the end of the month, as they won’t need quite so much summer heat to ripen their fruit before picking, and maybe a few summer cabbages, just to get them started.

Everything else will have to wait, until the mad, maximum seed-sowing months of April and May. By then we should (hopefully) have temperatures that will mean most species will have a short blast in the propagator to maximise the chances of germination and then be moved into the greenhouse to grow on until they’re ready for hardening off and planting out. But of course that will depend on the next few weeks’ worth of Great British weather.

If you’re vaguely interested in keeping tabs with the Plot #59 sowing and growing stats for the season, I’m doing my best to update a public read-access Google Sheet, which you can take a look at via that link.

How about you? Have you started anything off just yet, successfully or otherwise? Do you have any top tips for avoiding etiolation without going to the expense of installing grow-lights? Please do let me know, via the comments.