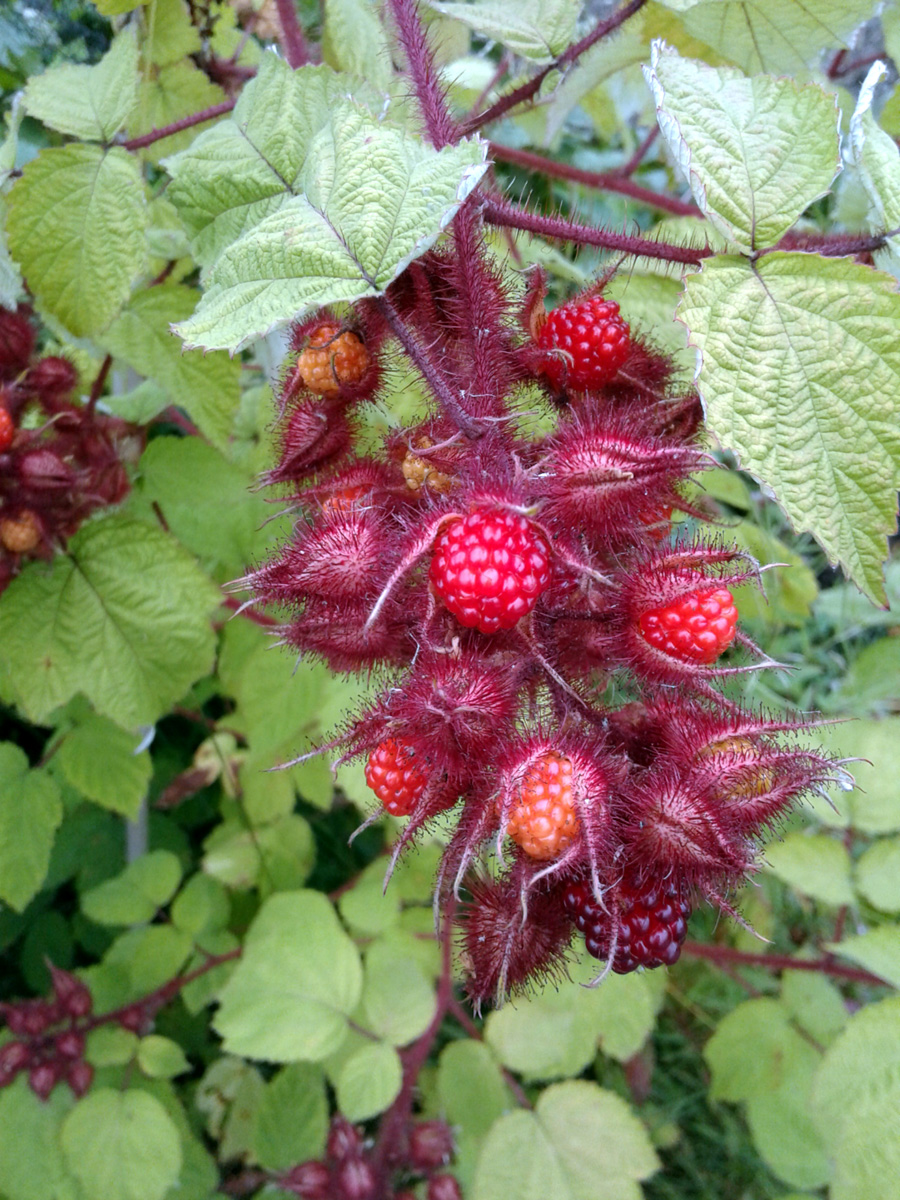 A few years ago, I saw Japanese Wineberry (Rubus phoenicolasius) growing in the walled garden at Beningborough Hall. It was an incredible thing: a mass of thick, red, spiny stems, arcing out in all directions from a central crown. And they had a single specimen for sale in the plant shop: mine!

It’s taken a couple of years for the plant to really get going in the fruit section on Plot #59, but with last year’s heatwave it really hit its stride, producing masses of small, raspberry-like, winegum-flavoured fruits. Thinking this might be a good one to share around, I decided to propagate a few plantlets.

Here’s how to do it:

Japanese Wineberry needs very little assistance to propagate. Similarly to its Rubus genus cousin, the bramble, it will happily send out its long, arcing stems over a metre or so from the parent plant.

Where the tips touch the ground they’ll take root – in a process called tip layering – and, with time, easily and happily produce another plant. (For this reason it’s considered an invasive species in some U.S. States, so, y’know, caveat emptor on that score.)

2. Dig Out the Plantlets

Any time during a dryish spell in winter, when the plant is still dormant, look for the ends of stems anchoring themselves in the ground. Give them a gentle tug – wearing thick gloves, these plants are viciously spiny – and if they’re firmly established, dig them out with a trowel, trim back the stem to a few inches in length, and pot them up. 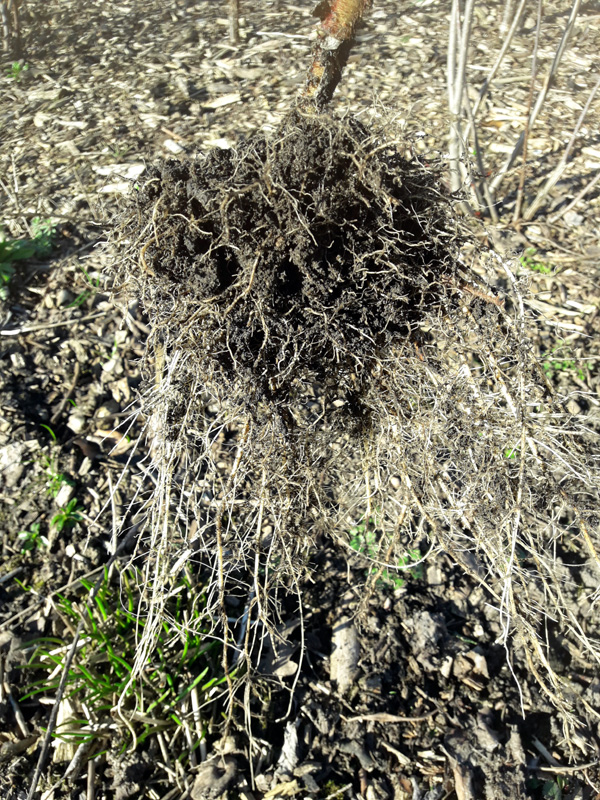 There’s a lovely root system all ready to go there. (Although I admit I could have taken the snap against a better background…)

All you have to do then is wait for signs of new shoots growing from the base, and you’ll have a new Japanese Wineberry to plant out yourself, give to a friend, or sell at your allotment shop.

The last job I like to do after propagating the plantlets is to tidy up the main plant. I cut back all main stems and side-stems to the three strongest and most vertically-aligned, cut those back to around four to five feet in length – to encourage the development of side-shoots – and then tie them firmly to a triple-cane support:

[Edit 20/03/21] Yeah, turns out a triple-cane support is no match for a mature wineberry bush. Ours ripped those canes right out of the ground on a windy day and I had to replace them with a tripod arrangement of triple-canes instead. This year, I’m investing in a 2.4m tree stake, driven at least 1 metre into the ground. Let’s see how that holds up instead. 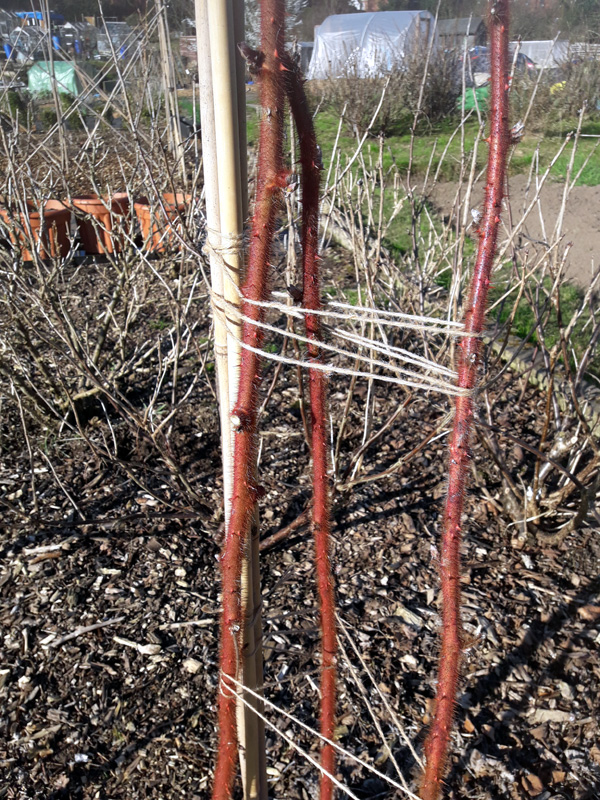 (It’s almost impossible to get my phone camera to auto-focus on the item in the foreground that you actually want a picture of, but you get the general idea…)

This helps the plant to fruit at a height that’s convenient for picking – bearing in mind that’s a potentially prickly job to do – and encourages those long, arcing stems for more propagation next year.

How about you? Have you grown Japanese Winberries yourself? Do you fancy giving them a go? Let me know, via the comments.

15 replies on “How To: Propagate a Japanese Wineberry”

We had a lovely Japanese wineberry which was producing lots of fruit. A couple of years ago it just suddenly died.we’ve been on the look out for a replacement but haven’t found one yet. I guess it will be an online job.

Hello Sue,
These grow wild in Virginia-best place to find them is at the edge of cornfields and/or in woods by cornfields- these are beautiful but definitely invasive here.

I think they’re becoming invasive on our plot this year. I didn’t get around to digging up last year’s rooted plantlets and now we have a collection of around ten or twelve, well on their way to becoming a thicket. (I think I’ll just pretend I was deliberately growing them on to a decent size before transplanting…)

I am visiting in W. Virginia. I moved to Oklahoma from Texas, so I’m not sure about Oklahoma soil. BUT, i fell in love with these berries. Is it possible to take a cutting from W. Virginia back to Oklahoma & grow it?

Hi Debora – If a stem has rooted into the ground and you can lift it with the rootball attached then cut it from the main plant, then yes, it should transplant okay. You’ll just need to give it enough space to grow and a support structure to grow it up, then keep an eye on how it develops as it grows.

Hello Sue,
Are you in England? I just looked up location of Green Lane Allot… These need very little water-England may have too much rain/not enough heat for these to do well. This year in Virginia we’re In a drought/90+F & humid-this berry is everywhere this year, tripping over the vines/climbing up trees & into fields-we’ve had to cut them back. Those in sun at top of hill by our cornfields are in full bloom now (early July). We also have them all over the woods-furry pods showing but not opened yet. We’ve never planted these-wildlife (esp deer) love the berries and have spread this berry, blackberries & black raspberries everywhere here. Beautiful, delicious & bug resistant but VERY hot during harvest (thorny too).

How do they do when starting from seeds?
Can you transplant during the summer?

I’ve not tried growing them from seed, and haven’t spotted any seedlings popping up on our patch yet, so I can’t provide a definite answer there. They’re much better at tip-rooting though – I have at least a dozen plantlets in various places. I’ll be transplanting those (to pots) in the winter though. It’s generally best to do that sort of thing when the plant is dormant and the weather is cooler. Having said that, if the plant was small enough and you dug it out in a large enough clump of soil to minimise root damage and watered it well on re-planting, then you should be able to keep it alive long enough for it to re-establish elsewhere.

I live in US, Kentucky, and have 3 wineberry plants in my backyard, and I just harvested fruit today. And about a 2 minute walk there is quite a patch, and I harvest a cup a day. I transplanted my plants from that patch actually. Will be digging more small plants in the fall.

I just spotted a Japanese wineberry in our local garden shop (England) and bought it out of interest and in the hope the berries would be tasty – they are!. I googled to find out how to ‘establish’ them, but now wonder if it will become invasive! Especially as we are now in the middle of a heat wave! Would they grow best on a frame and keep any arcing branches from touching the ground?
If they are potentially prolific how are they best used to eat etc?

Good purchase! I hope you enjoy your new wineberry for many years to come 🙂

They’re only likely to be invasive if you take your eye off them. After flowering and fruiting they send out long, arching stems and it’s these that will tip-layer and root if you let them. You can either intercept them stems and encourage them to root into pots of compost, or cut the stems off entirely as you would do with unwanted strawberry runners, or let them root and then dig up the new plants for potting on and redistribution. You’ll probably only need the one bush yourself. Ours is now a good metre or two across and we’ve had hundreds and hundreds of berries off it this year. I have to say, they’ve not been quite as sweet as usual due to the lack of sunshine in July, but the most recent picking was better.

Usage-wise, you can eat them like sweets (my usual option) or do all the sorts of things you’d do with raspberries – from making jam to flavouring vodka, or piling them up in a bowl of ice cream.

Raspberries are so bland (flavour-wise) in comparison aren’t they?

Well, I would have completely agreed with you, until this year. But July was so poor for sunshine levels that the wineberry fruit we picked at the end of the month was really rather bland and insipid. It was red, and definitely ready for picking, but the sugars hadn’t developed properly, so the flavour of the berries hadn’t either. I’m happy to say they were much better by mid-August, after a couple of weeks of decent sun exposure, but still not as good as they’ve been in the past couple of years, 2018 in particular.

By comparison, our raspberries have been pretty good this year. One cultivar – ‘Joan J’, which we planted in early 2019 – ripened from mid August onwards and the berries were both huge and very tasty, with a lovely sweet-sharpness. And the purple ‘Glencoe’ berries, which ripened ridiculously early for an Autumn-fruiter, back at the end of June, were pretty good as well.

So it seems it all really all depends on the weather patterns over the summer.

Hi Stephanie – They all died? That seems unusual, they’re pretty tough plants and can usually tough out most conditions. There’s not likely to be a problem with the soil at all, is there? Any chemical residues from weedkillers, anything like that?

Anyhow, what you could do is grow them on for a year in large pots, to see how well they establish. You should get multiple stems growing from the base – it’s worth providing a stake or strong bamboo cane to tie them in to, to stop them sprawling – and maybe berries on some of them. Then, when you’re sure they’re doing well, transfer them from the pots and put them into the ground over the winter, when they’re dormant. That way you’ll be minimising the possibility of damage to the root ball.