A couple of weeks ago I enjoyed the opportunity to work on a rather lovely Bramley’s Seedling tree that hadn’t been pruned for a while and was starting to get too big for its space.

The owner of the tree – which was highly productive last year – was very keen that it shouldn’t just be hacked back, but wanted to gain space around the base of the tree for lawn maintenance and accessing the border that the tree is planted.

The clear answer was a crown-lift: removing three large, low-growing branches to reduce crowding at the base and allow in more light as well.

Here’s a pic of the tree, with the three branches marked for removal: 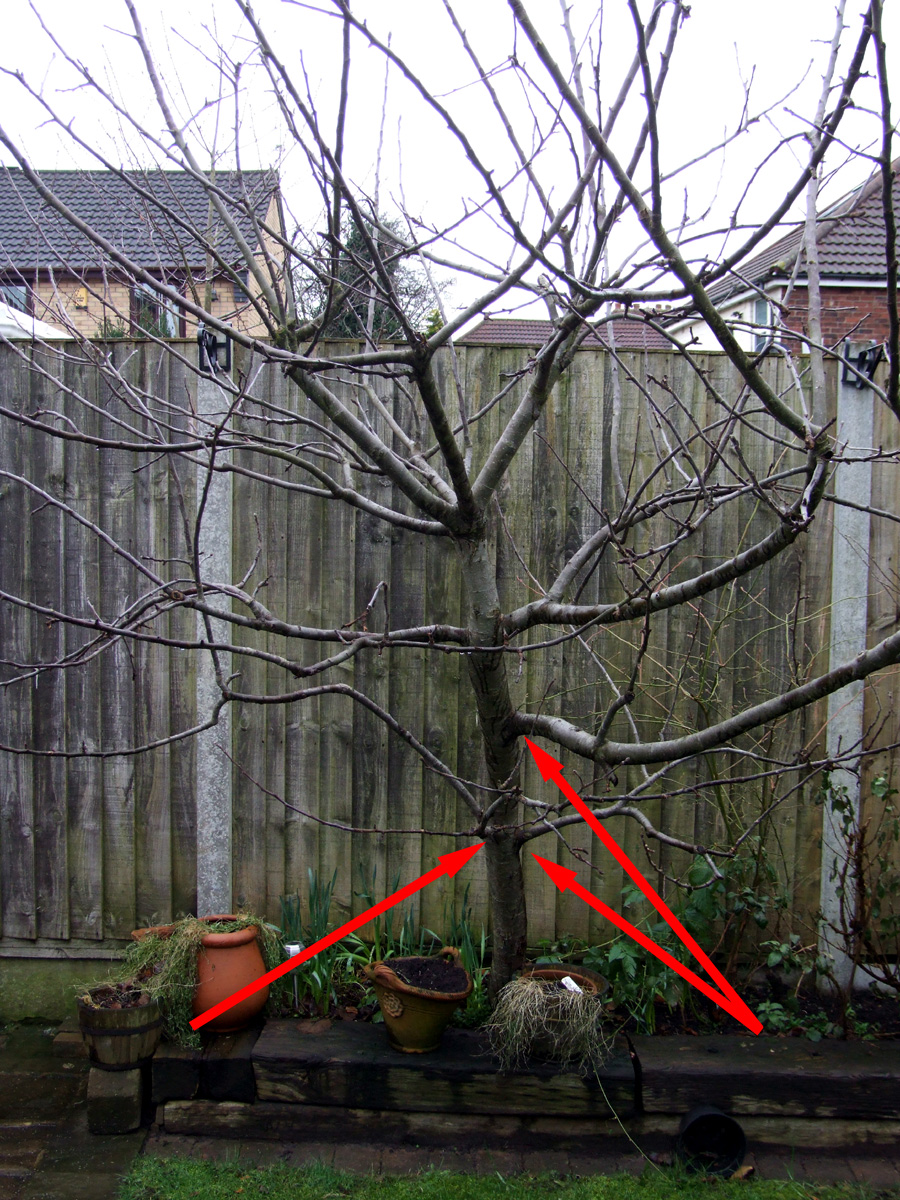 Unfortunately, I forgot to take a pic the side to show just how much it leans out away from the fence: the fence and next door’s garage are to the south to south-west and so the sun is blocked for large parts of the day; the tree grows out into the middle of the garden as a result, looking for light.

The three marked branches plus one more around the back – and particularly that thick one – growing low and potentially dangerous to unprotected eyes, were following the same pattern. In addition, and even more importantly, they were adding a lot of weight to that side of the tree and contributing to the the lean of the trunk.

Here’s a close-up of the area I was working in: 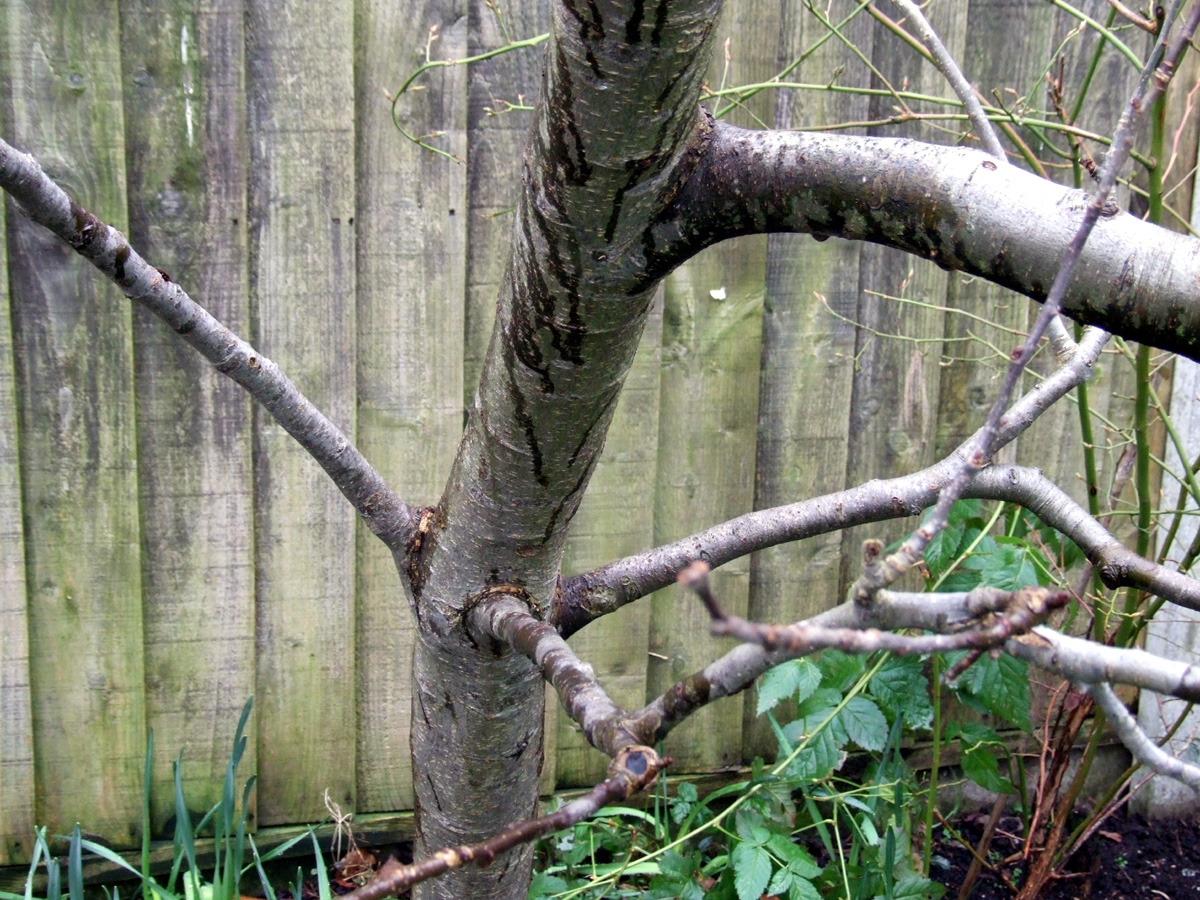 And here’s how much cleaner and less congested it looks after the branches were removed: 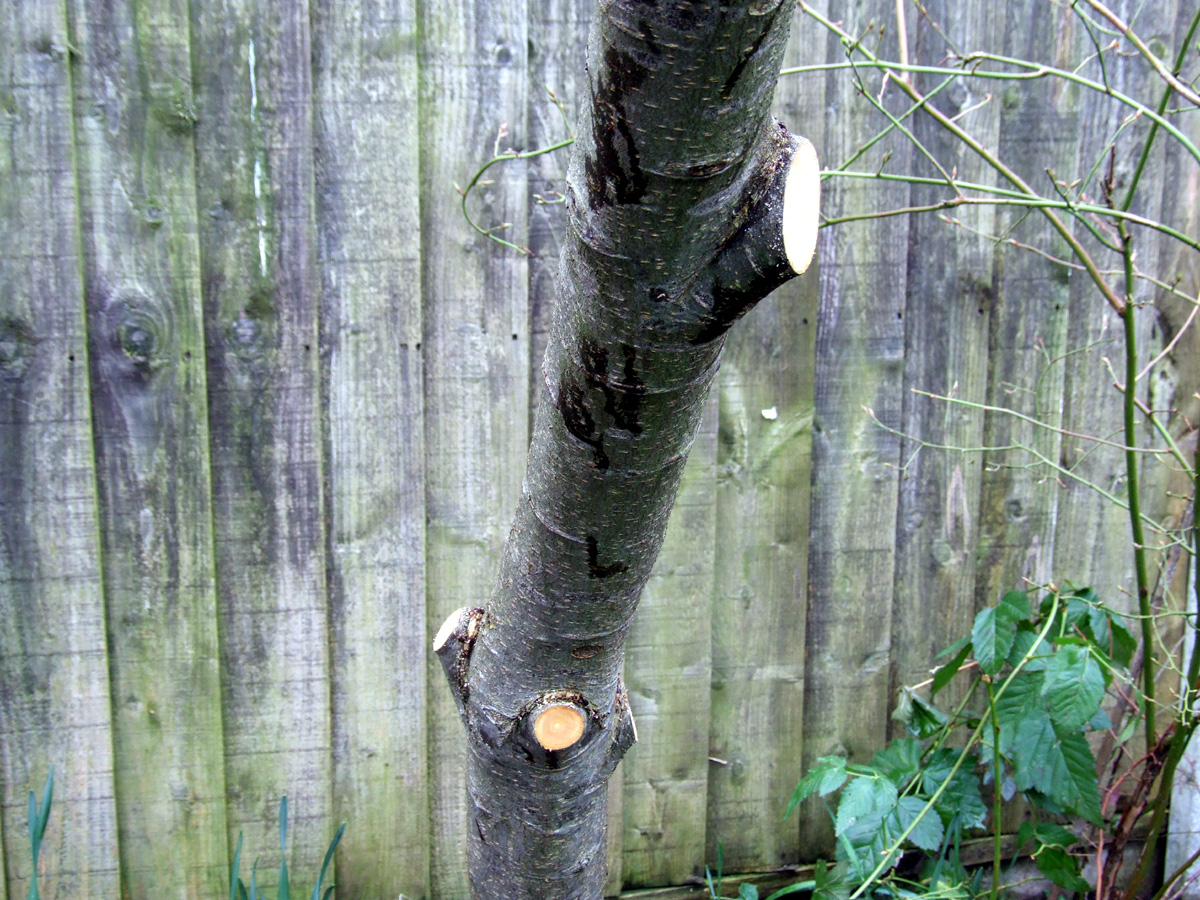 I used good, sharp tools – bypassloppers to take back the branches and reduce the weight, then either a Felco F180 or SilkyFox Pocketboy pruning saw to finish – to make clean cuts that should heal nicely once the tree emerges from dormancy. I cut on a good, steep angle to ensure water would run off as well: 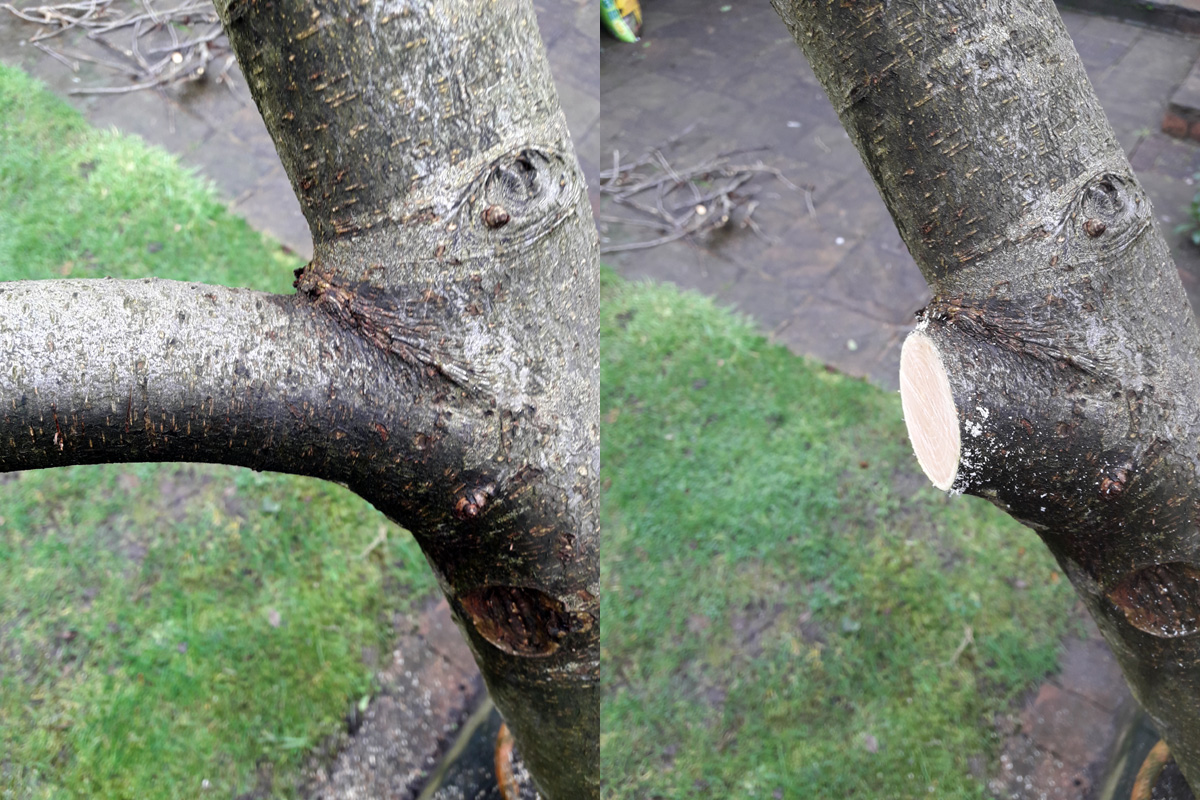 Looking at the rings on the cut end, I reckon that branch that been growing and thickening – adding to the weight on that side of the tree – for a good seven or eight years: 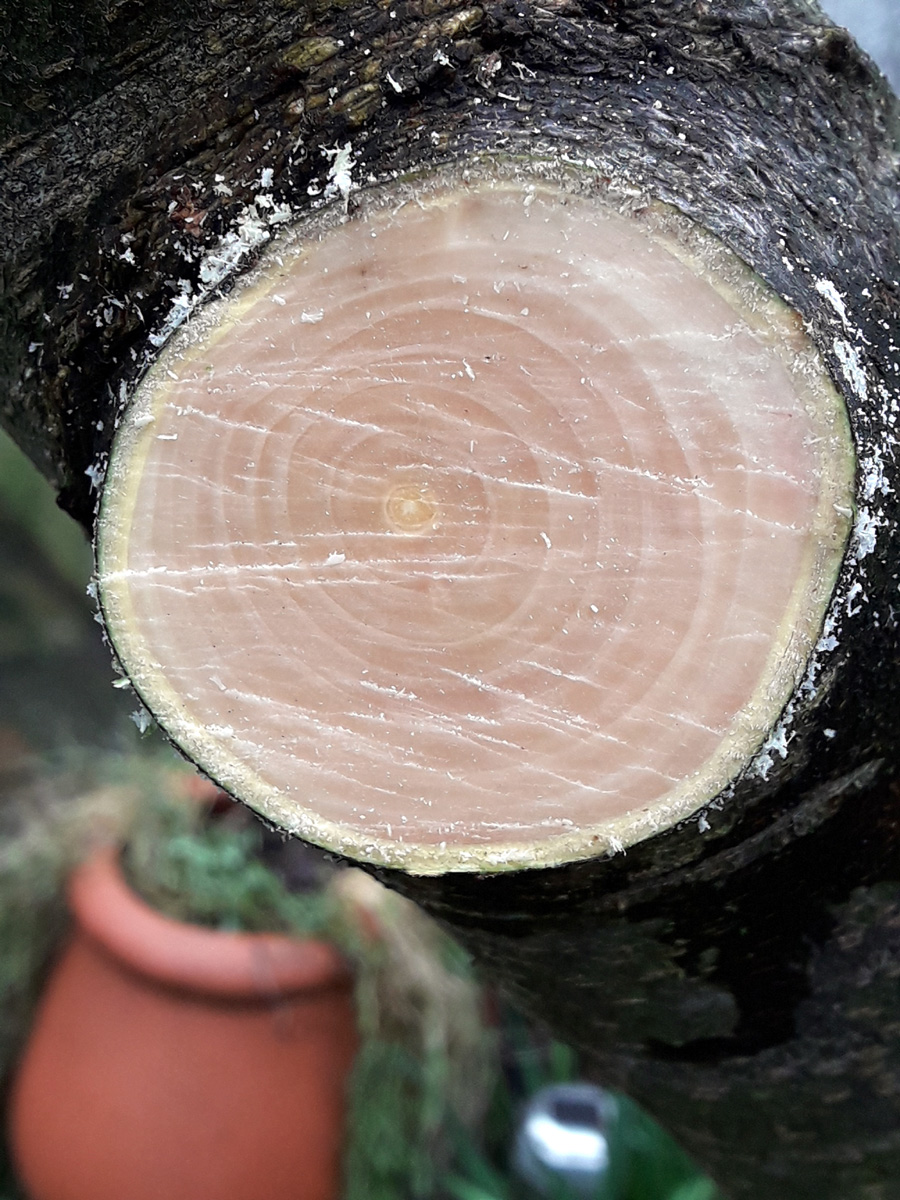 Looking at the post-pruning shape of the tree, although the photo isn’t amazingly clear, you can hopefully get a sense of how much more open and balanced it looks: 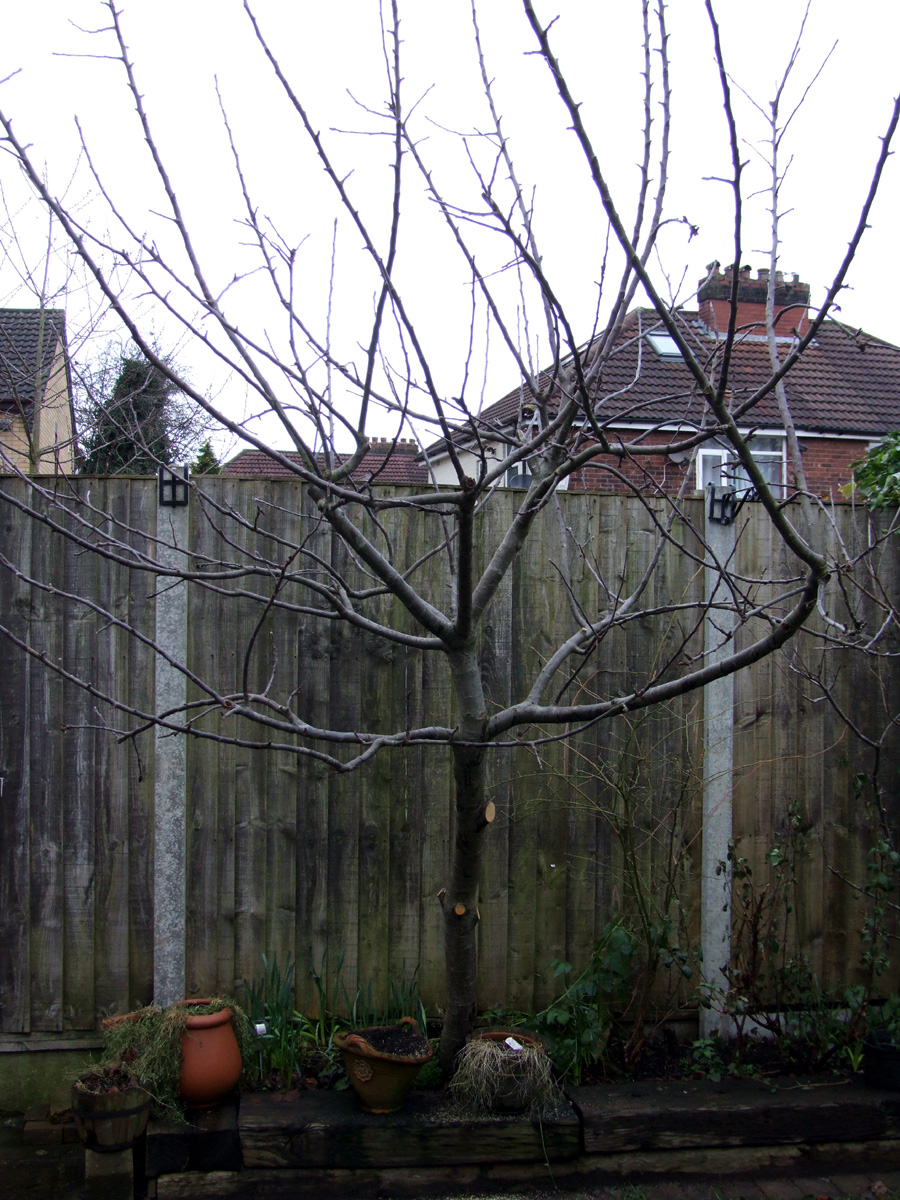 Admittedly, there are still parts of the tree that need work: the crown is a little lofty and could perhaps be reduced, and that odd-angled branch on the right of the pic is another possible candidate for removal. But as I judged I’d already removed around 15%-20% of the tree’s canopy, I decided to stop there and not make any other cuts – aside from removing a few damaged or congested smaller branches from the centre of the tree – rather than risk causing too much imbalance in the tree this growing season.

I’m going to go back and take another look at it in the summer to see how the tree has responded to the cuts I’ve made and then I’m hopeful that I’ll be asked back next winter to work on it again: maybe a crown reduction or a more general thinning next time, once that problem branch has been addressed and corrected.

In the meantime, here’s hoping the owner will enjoy another year’s bounteous harvest. The tree is covered in potential fruit buds, so as long as the weather and the pollinators (the tree is less than half a mile from a 15-hive apiary, so that shouldn’t be a problem) are kind, then there should be plenty more apples to enjoy for many years to come: 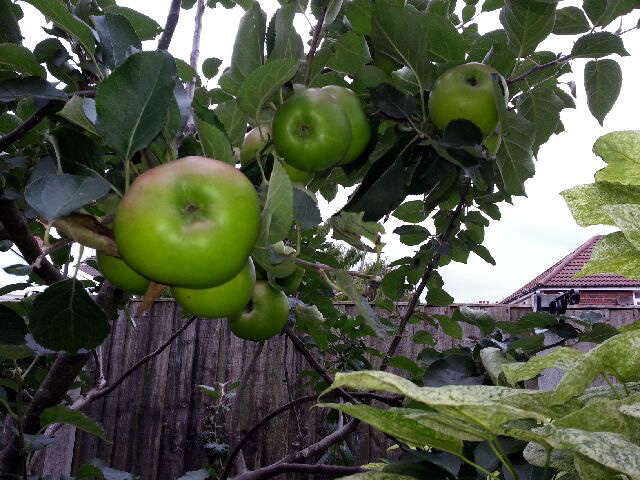 I’ve heard that it is best for the health of the tree to remove no more than one third of the crown at a time.

Anyway, the branches you removed were low, weren’t they. The tree will probably be fine with its lean, as long as it has a good root system but I guess it depends how much wind it is exposed to.

Yeah, about 20% – 30% is generally recommended, unless you are doing a hard reset.

The lean on this particular tree isn’t too severe, and the back garden is quite sheltered, but reducing the weight on that side won’t have hurt.