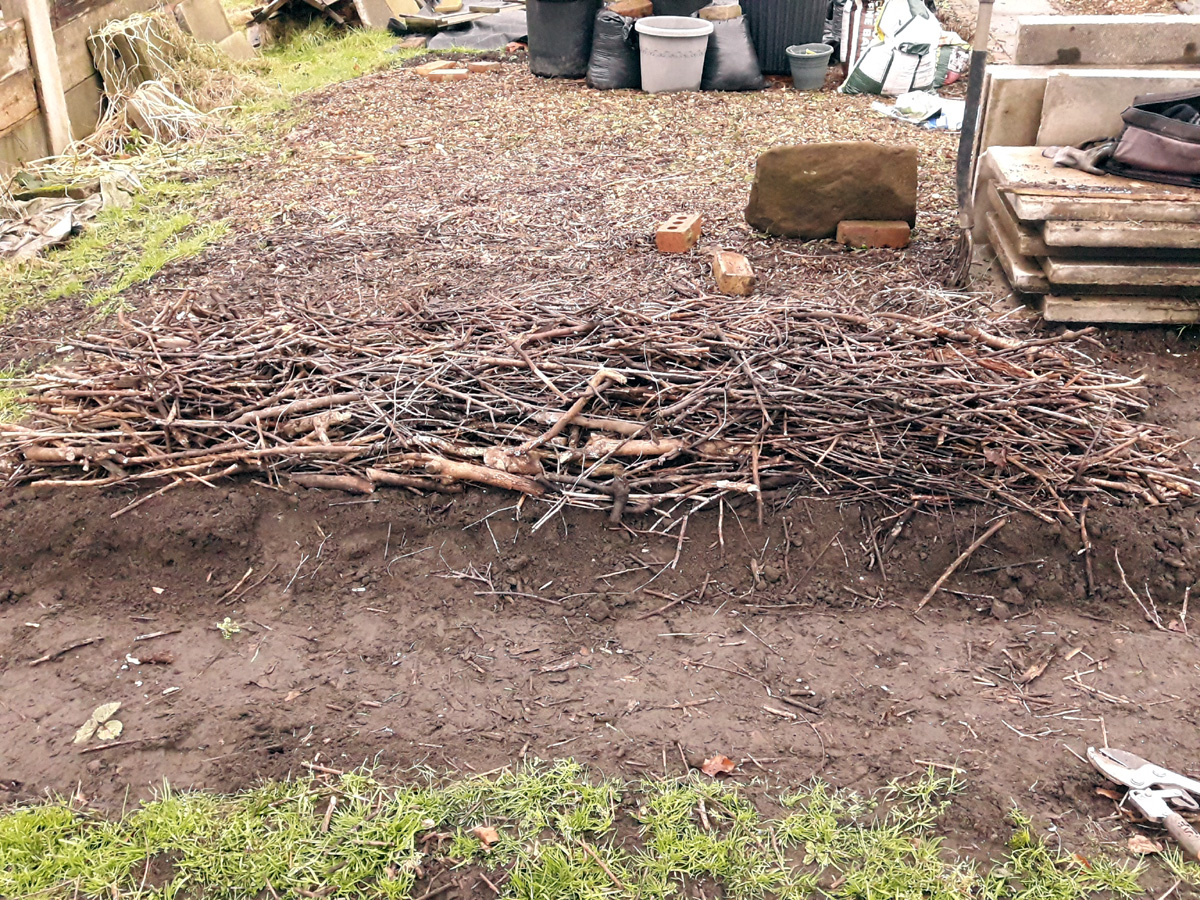 After researching and constructing a couple of Hugelkultur growing beds for our ‘growing for the future’ project at work recently, I decided that I’d put one in on our allotment as well.

Hugelkultur – it’s a German word meaning ‘mound (or hill) culture’ – is a technique developed by Permaculture practitioners that is said to offer a range of benefits:

The system does also have its detractors – see the Wikipedia article on the subject for more details – but as I’m only trying it on a relatively small scale, I’m sure the interest of the experiment alone will outweigh any minor drawbacks.

For ‘biomass’ read: pretty much any woody organic matter that you have lying around that you’re happy to bury in a mound of earth.

In our case, I was keen to get rid of two old wood piles that had built up at the back of the plot, consisting of four years’ worth of fruit bush, willow and other assorted clippings and cuttings. Unfortunately, they were both situated right next to my neighbour’s huge compost heap, which is sadly infested with bindweed. Said woodpiles were therefore a bindweed climbing frame for most of the year, and of minimal use for anything else, except wildlife habitat (and we’ll be addressing that with more bug hotels in due course).

I also had a few branches left over from cherry tree that we removed three or four years ago, and some prunings from the overgrown plum at the back of a neighbour’s plot that I tackled for them last summer, and some old, brittle sunflower stems. All good material for Hugelkultur. The one thing I avoided using was the fresh trimmings from the willow on our plot that I coppiced right back a couple of weeks ago. That stuff sets down roots and re-grows at the slightest excuse and I didn’t want to turn the Hugelkultur bed into a willow fedge.

If you’d like detailed instructions on how to build a Hugelkultur bed, there are plenty to be found online, including lots of video demonstrations. Edit 12.02.19 Also, Helen – who left a very helpful comment, below, has a post on her ‘Growing Out of Chaos’ blog with some further tips and pointers.

Here’s how I went about it.

Last year I grew potatoes and then squash on the two ridges shown here. To prepare for the Hugelkultur bed, I dug out a channel between them, just a couple of inches deep or so, to give an overall height of around 8 inches (18-20cm or so) 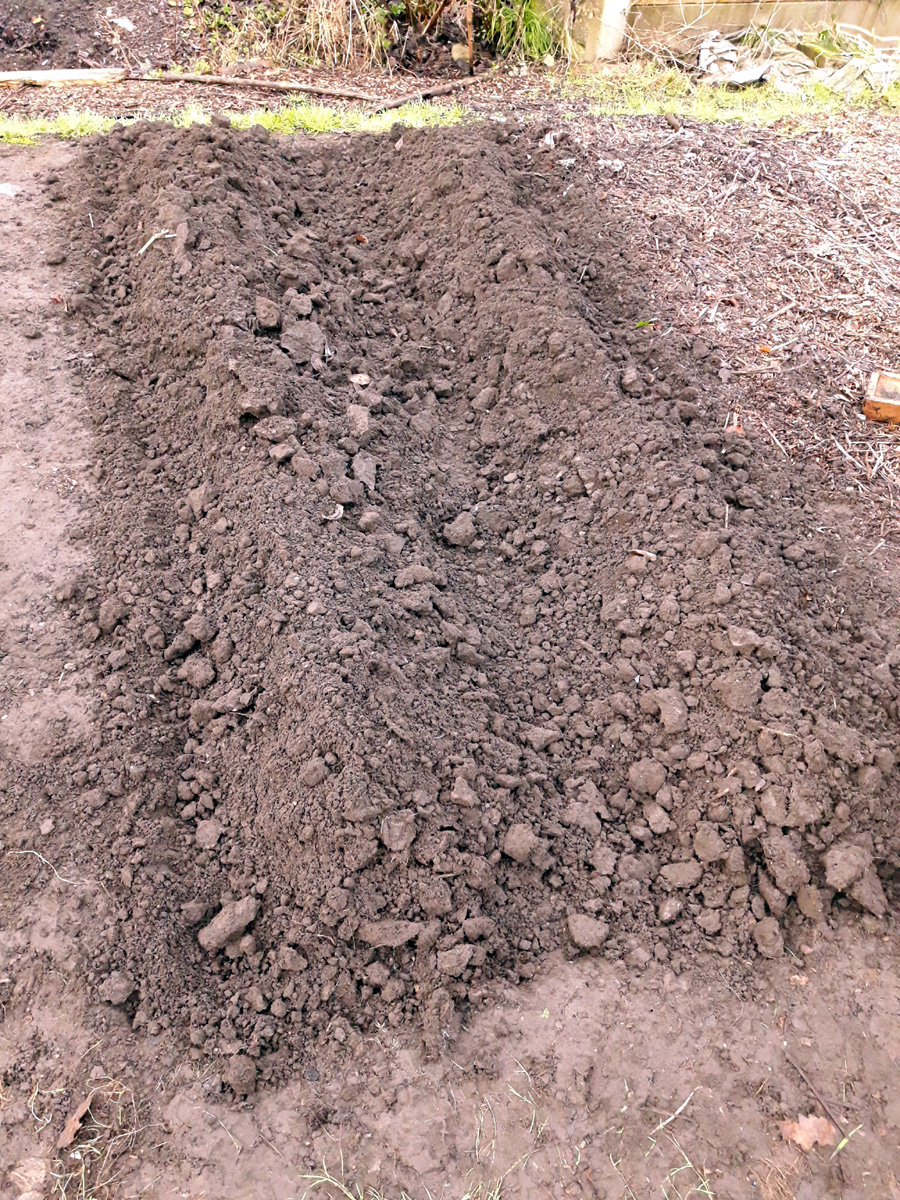 Starting with the thicker, woodier stems that will take longer to decompose, I started building up the bed in layers. First a good layer of woody material, then a thin cover of soil. The latter is to make sure there are plenty of soil microorganisms and fungal mycelium introduced to the centre of the pile. 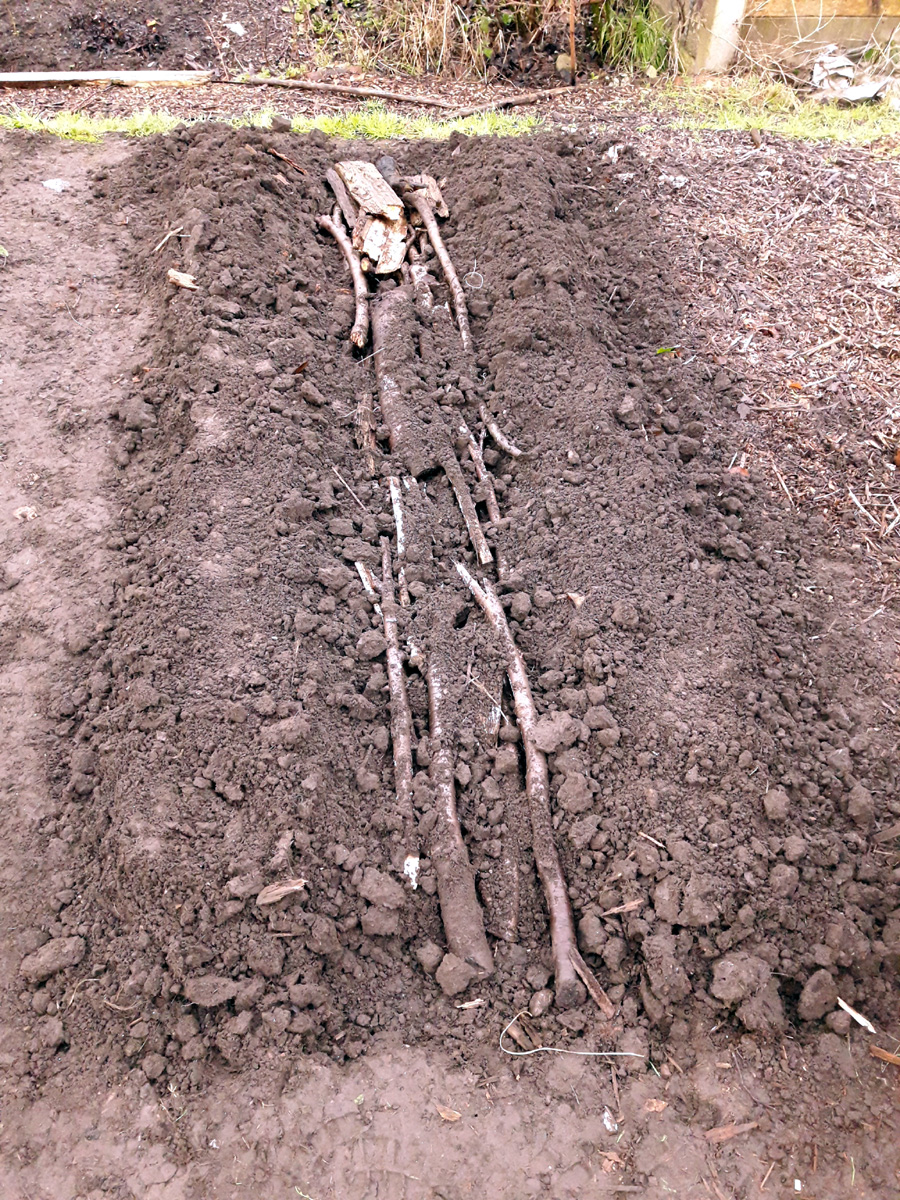 Keep doing the above, until you’ve got a pile that you feel is high enough for your purposes, or until you run out of biomass to add to the heap. 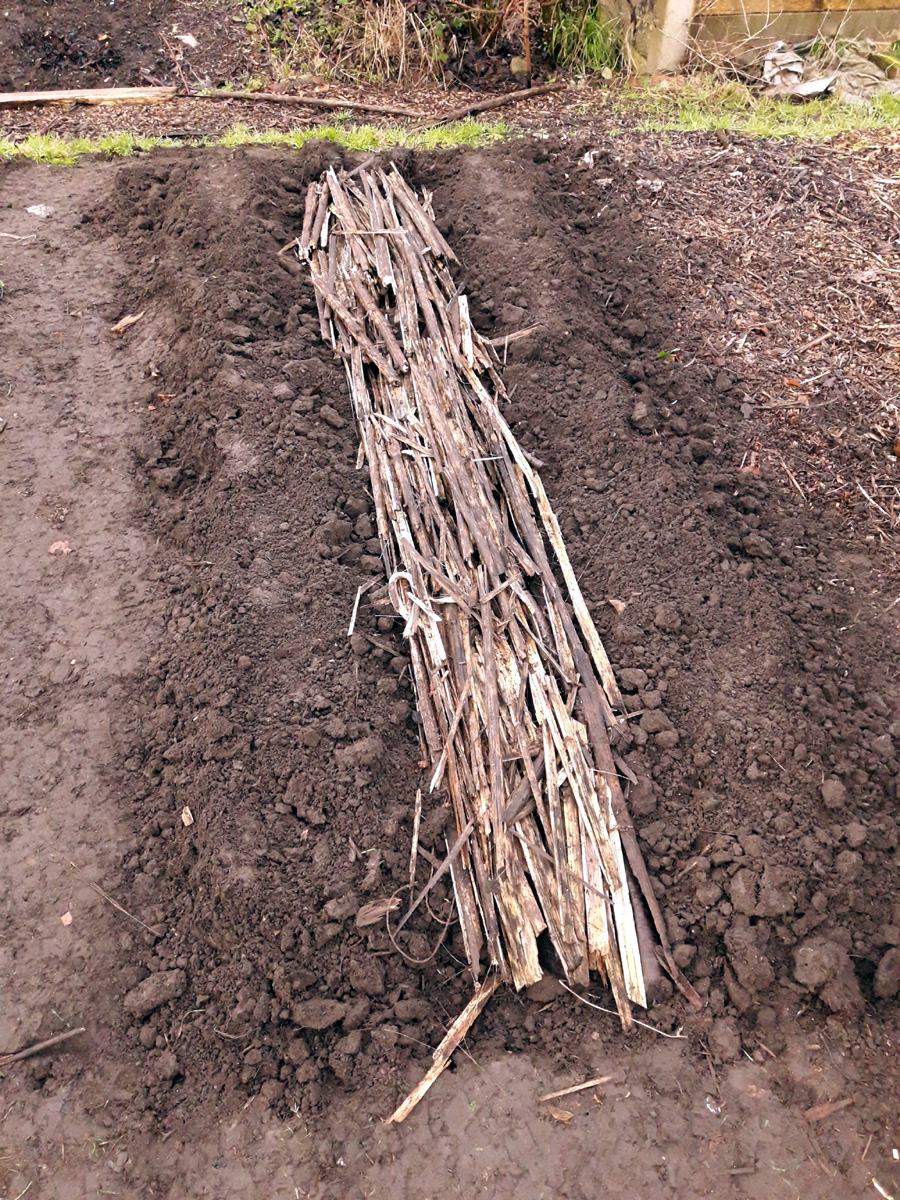 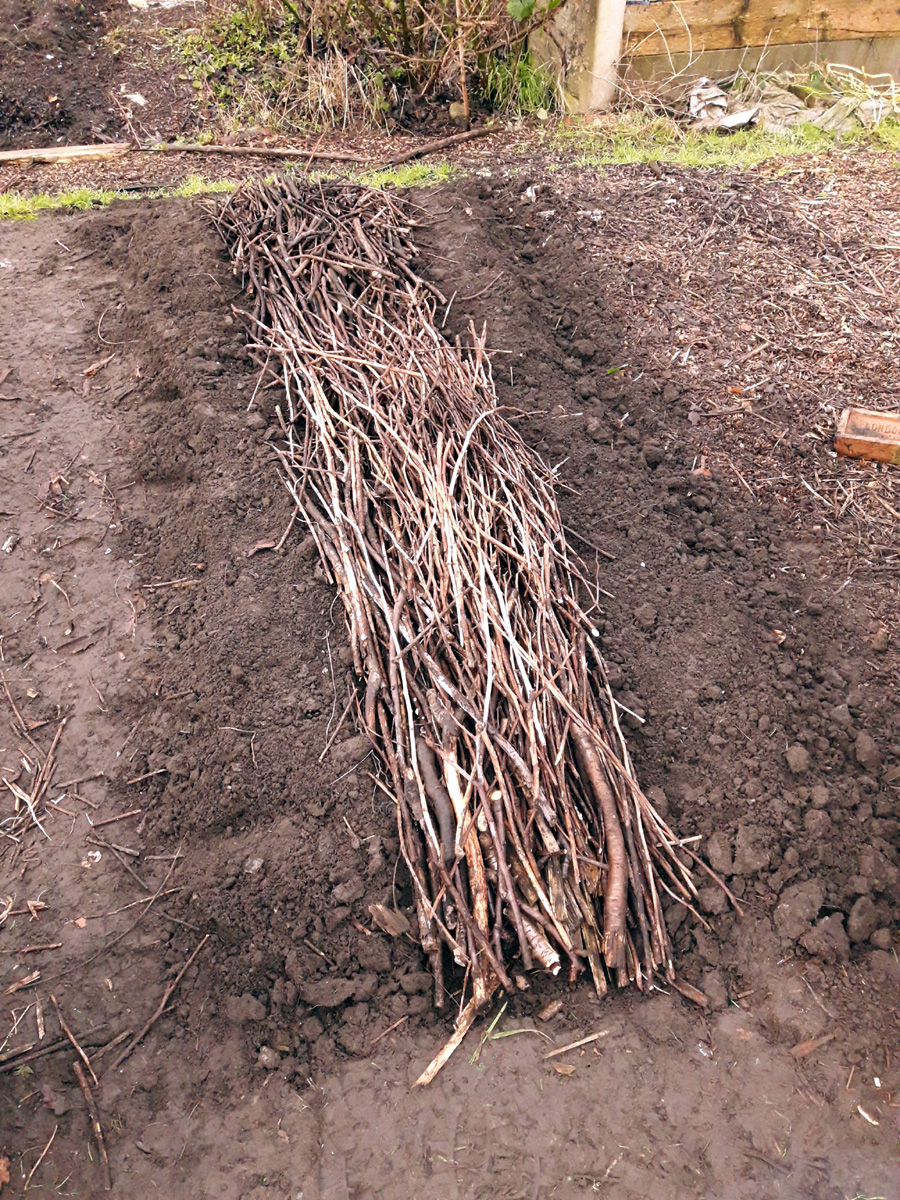 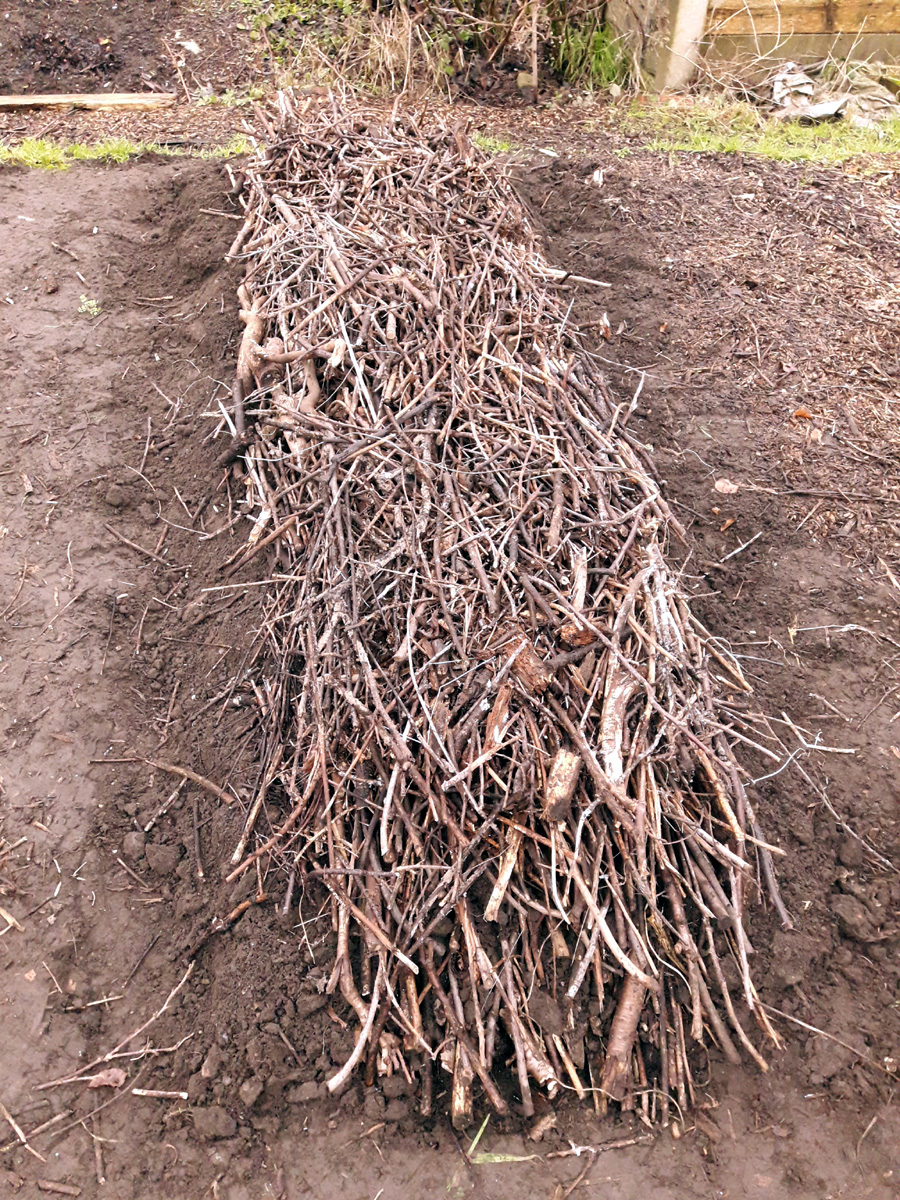 4. Cover with Turf and Soil

I haven’t actually completed this stage yet. Some of the wood from the bottom of the second pile was still quite dry and with persistent rain forecast towards the end of last week, I wanted to leave the top off to give it a good soaking, again, to help with the decomposition.

I’m expecting that the Hugelkultur bed will shift and settle as the woody material in the middle breaks down and collapses, so it’s probably not suitable for anything like a fruit bush or a tree. But annual plants should do well, planted into the outside of the mound.

I’m planning to grow squashes in the bed this year, to see how they do. They’re quite hungry plants, so I’m hoping the mass of slow-release nutrients will feed them well through their growing season. I’ll aim to grow the same variety elsewhere on the plot in regular soil at the same time, by way of comparison. I’ll keep you posted.

How about you, have you ever tried a Hugelkultur growing system? Any tips or warnings if so? Please do let me know, via the comments.

9 replies on “Building a Hugelkultur Bed on Plot #59”

Oooh! This is on my list of possible projects for the school garden, so your post is very timely for me. We certainly have the wood/biomass stack. Do keep us posted.

Will do, Mal. Learning as I go myself, so hopefully I’ll have something interesting to report on through the year.

Hi, I’ve been building and using hugelbeds for about four years now.

The decomposition process might take longer than 5-6 years. Depends how rotten the wood was before it went in the mound, what kind of soil you’ve got and how much rain you’ve got, for example. That said, your mound could collapse within months, although it might not, as you have been using layers of soil between the wood.

An issue I’ve read about but can’t verify is that the contents of the mound will deprive your plantings of nitrogen. Perhaps before you put your turf on you could add some compost or other more immediately available nitrogen.

The wood kin the bed ranges in rottenness from three-year-old log-pile material complete with thriving fungal colonies, to fairly fresh and / or dried-out material. Soil is sandy loam, and we’re in Manchester, so I really don’t think rainfall should be a problem, unless we have another summer like last year, of course.

Potential Nitrogen robbery is a very good point, although I think I read something when I was researching that said Nitrogen levels can remain fairly high as long as there’s a good layer of mulch – or, as you say, compost – on the outer part of the bed for the plant roots to access. I’ll raid my compost bins, see what’s good to use. I put some old, blown cabbages on the compost heap just the other day as well, so I might fish those back out, chop ’em up and add ’em in. Should be plenty of N there. I won’t be planting into the bed until I have squashes ready to go in either, so I might add some comfrey leaves as well, once they’ve put in their inevitable appearance later in the year.

Thanks again, much appreciated!

Fab that you’ve fungi on some of the wood. This will help decomposition no end – and the fact that some is starting to decompose anyway.
I’ve got sandy loam, too! Hence the venture into hugelculture to try and retain water, especially being on the other side of the Pennines.
Your nitrogen ingredients sound good. Hope you get lots of lovely squash this summer!

Cheers Helen! Someone else on Twitter suggested ‘more muck’ as well, so I’ll chuck on some well-rotted manure as well as the greens.

I’m thinking of growing scrambling Uchiki Kuri on plastic mesh frames above the bed, we’ll see how that goes later in the year 🙂

Just wondering how this is working one year on? I have an allotment that floods and was thinking maybe hugel beds would work well. I have only just got the allotment and can’t do anything until the ground clears.

One year on and the Hugel bed seems to be doing well. It’s certainly still intact – it didn’t collapse and has weathered the recent storms quite well. I haven’t dug down into it to see how much of the rougher material I put at the bottom has decomposed, but I’m guessing it’s still fairly woody, which is why the top of the bed hasn’t sunk in.

A few weeks ago, I weeded the Hugel and gave it a fresh coating of semi-rooted bark / wood-chip which I’m hoping might help to suppress weed growth this year. I’m not sure what I’ll try growing in it this year yet. Last year I went for patti-pan squashes, but I think there was just too much Nitrogen-rich material in the bed, as they grew a whole lot of leaf and stem but little in the way of usable fruit. Perhaps I’ll go for something simple like beetroot or turnip, which will help to avoid wind-rock as well. I’ll have to write up a longer update later in the growing season, once I know what’s what.

For your plot, I’d suggest that if flooding is an issue then either an improved drainage system – maybe digging out a few sumps or soak-away pits in the worst-affected areas, back-filling with rubble, broken brick or gravel and then re-surfacing over that – might help? Either that or raised beds of some sort, but perhaps something flatter in shape than the Hugel I put together. Wooden edging boards can be useful to keep the soil in place if you do suffer flooding, but they do then provide habitat for slugs and snails.

All depends on how bad the waterlogging is, what sort of soil you have and how quickly it drains, and then how much effort you can or want to put in to addressing the problems.

Thanks so much. That’s really helpful. I’m pretty much a novice at this. There is considerable soil erosion and I was thinking quite high hugel beds would help with soil depletion. I would at least be able to grow something edible in one or two beds and maybe cover crop some of the others with clover etc. With may be gravel or wood chip paths? No idea really, I’m just winging it!

Thanks so much for the reply. Much appreciated. I’ll keep an eye for your follow up posts.