Please n.b. As per the comment by Anton from Garden Organic at the end of this post, we’re actually trialling crimson clover, rather than red clover. Please feel free to mentally substitute the correct variety throughout the following… 🙂

This year I’ve joined in with a trial of two varieties of clover organised by Garden Organic. The aim is to see whether Persian clover (Trifolium resupinatum) is an effective green manure, in direct comparison with red crimson clover (Trifolium pratense incarnatum).

As instructed, I first sowed two patches of clover seed – one red, one Persian – back in March. The weather was so poor that the seed failed to germinate, apart from a few tiny stragglers, so I dropped Garden Organic a line and offered to re-sow. They sent me some more seed in May, I sowed when the weather had improved a bit, and I’m glad to say that this time the seed germinated nicely and I’ve been tracking progress in photos since then.

I’m afraid that although I read the trial notes thoroughly when they arrived, I’ve forgotten to take measurements, or including measuring marks in the photos. Easily done when you’ve got 1,001 other things to be remembering and thinking about during an allotment session, and hopefully my observations will still be useful. 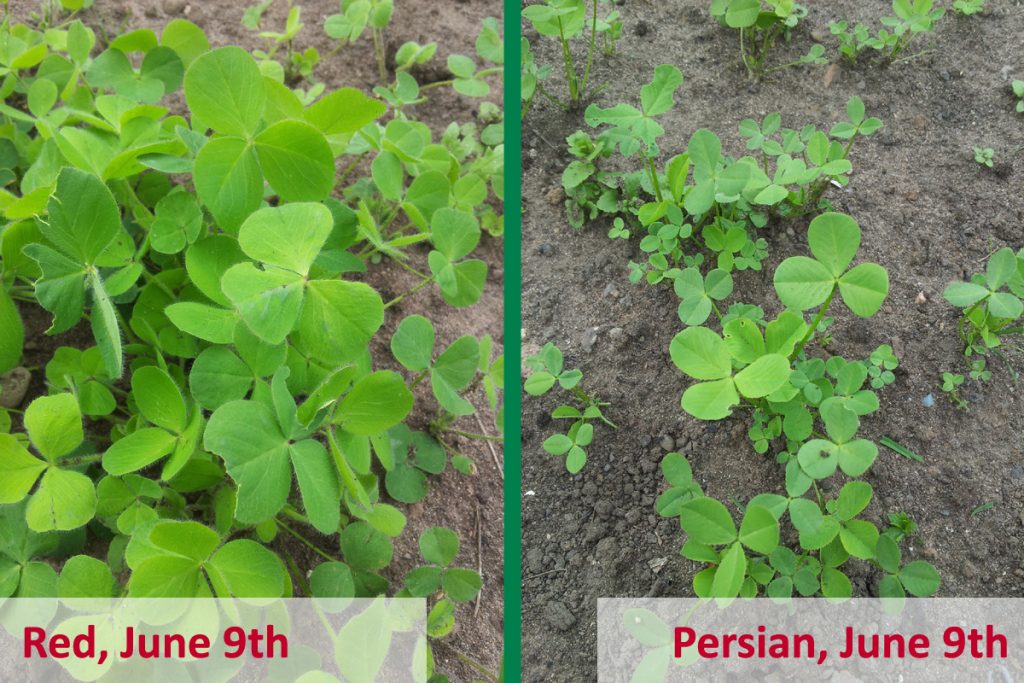 Both varieties have germinated, but already the red clover is much more vigorous and robust-looking than the thinner, patchier Persian. 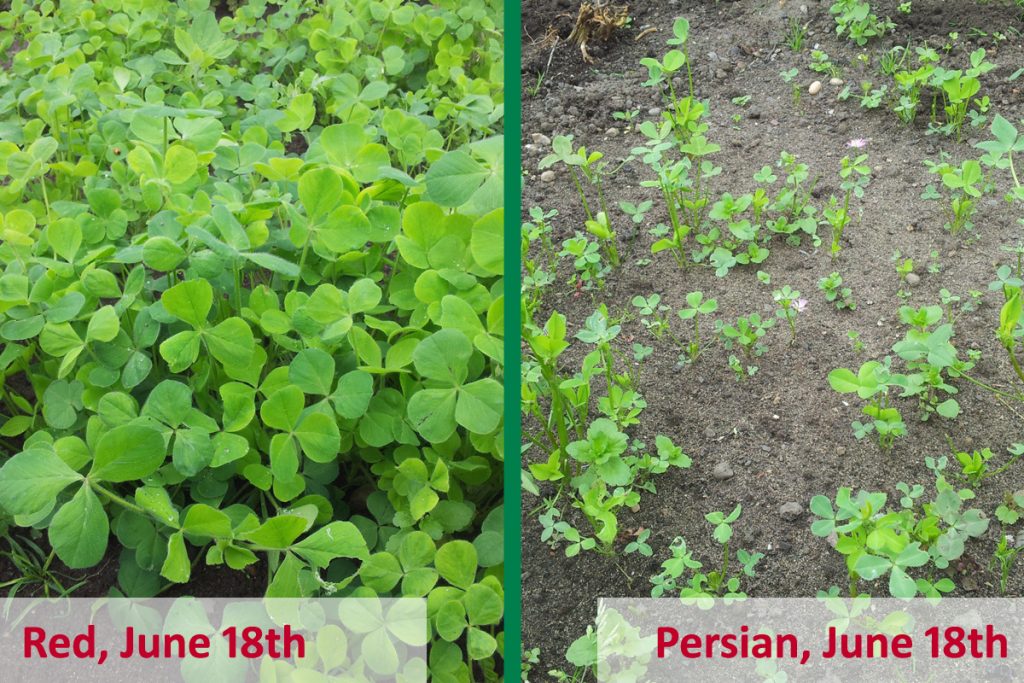 Nine days later and whilst the red clover has expanded to fill most of the metre-square patch, the Persian is now lagging badly behind, leaving lots of gaps for weed seeds to colonise. 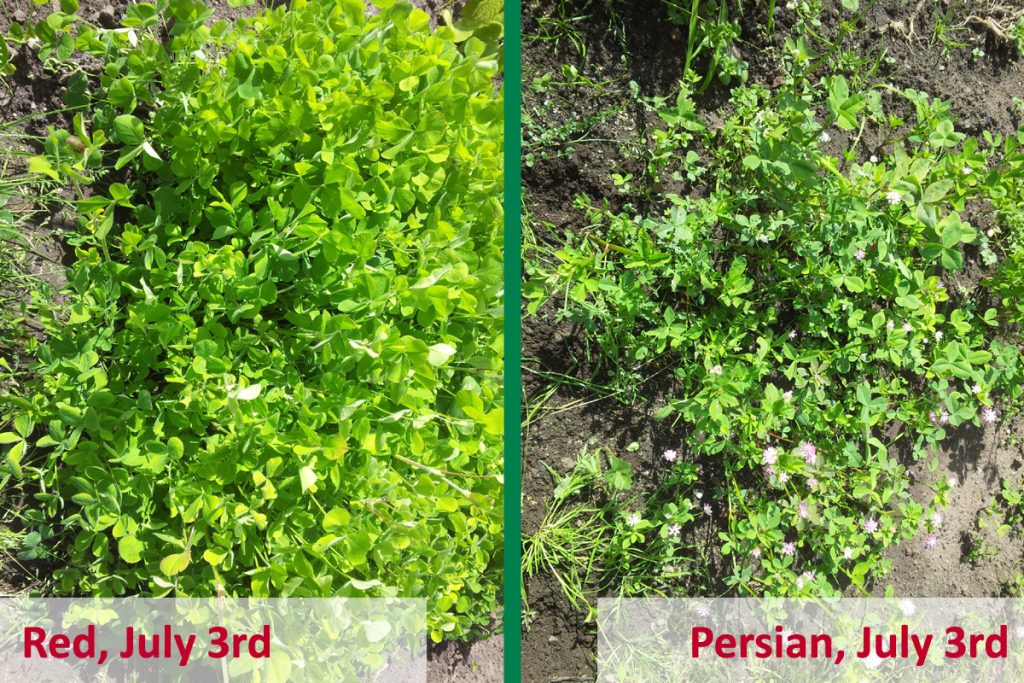 The Persian has finally started to thicken up a little and is already flowering, producing delicate, daisy-like, flat-faced white flowers edged in pink, nothing like the tufted flower heads that you usually expect to see on native clover. 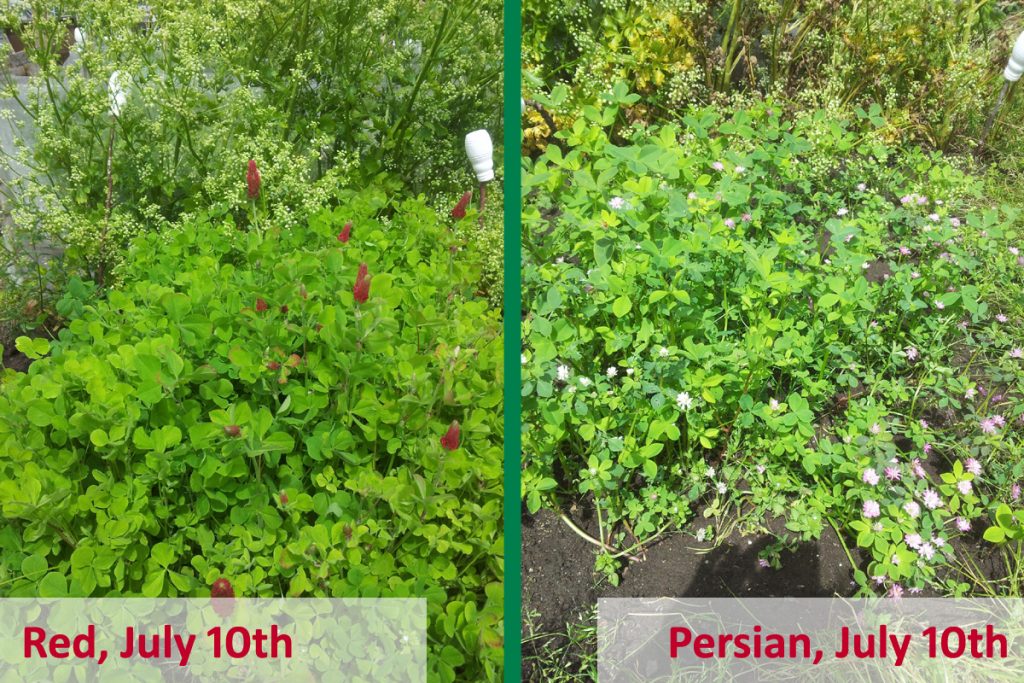 A week later and the red is now showing the classic clover flower spikes, and the Persian has thickened a little more. I’ve had to do quite a bit more weeding on the latter though, due to the comparative sparseness of the foliage. 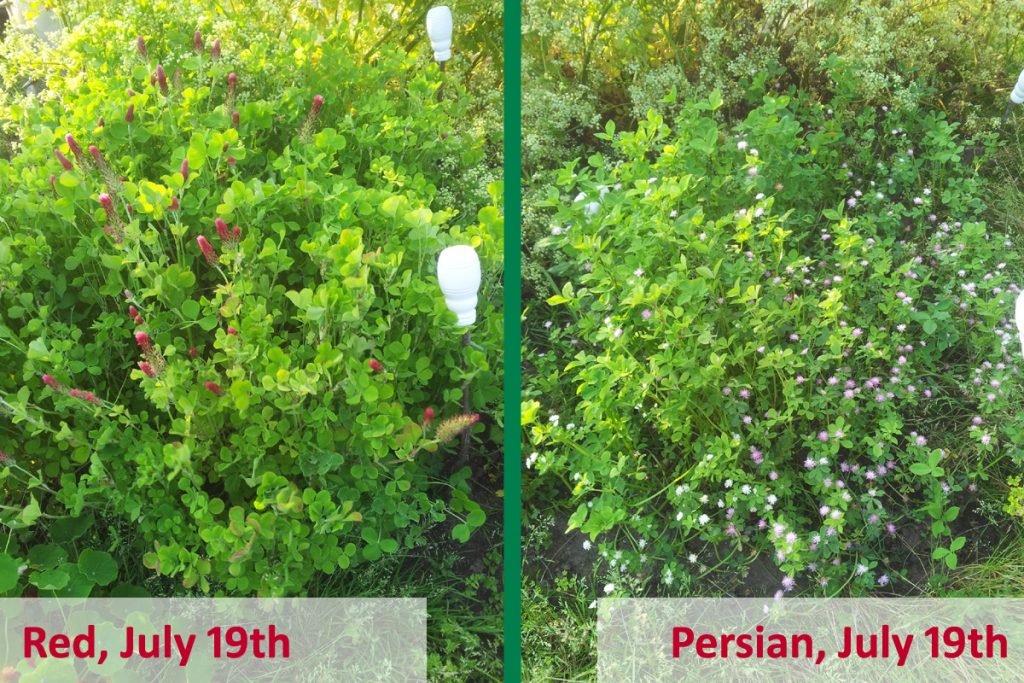 Both varieties are now at full strength. The bees are loving the flowers and the foliage is rich and lush. The photo shows that the red is still out-performing the Persian in terms of size and vigour.

Assessing growth rate and coverage are only part of the trial though. Another element is to see what happens once the plants die back in winter. The theory is that the Persian clover will decompose much more quickly than the red, leaving a lot less ‘straw’ to be manually dug in to the soil. Based on my previous experience with red clover, I’d imagine that both will set seed and we’ll be looking at another batch of clover coming up in the same place once the weather warms up next Spring.

Nice blog, good to see your clover flowering. Just to clarify that the plant with red flowers is crimson clover, not red clover. Confusingly, red clover has purple flowers! Crimson is an annual so dies back, whereas red is a perennial with a small tap root that sticks around for a few years.

So we’re trialling Crimson vs Persian, rather than Red vs Persian. Damn, I’m going to have to re-do all the captions on those photos… 😉