My wife, Jo, and I took on Plot #59 at Langley Allotments in Prestwich in January 2014. It had been only minimally worked and by the last tenant or two and by the time we arrived had mostly gone back to grass and weed. You can see from these photos what we had to contend with (click the thumbnails for a larger version):

Our first year on the plot was one of manic weed clearance, with a bit of growing here and there as time and space allowed. We managed to grow a decent crop of staples – broad beans, potatoes, runner beans, courgettes, kale, garlic, leeks, cabbages, rhubarb, raspberries and blackcurrants – and were determined to push ahead in year two.

Of course we then decided to move house and ended up (due to all the usual palaver) doing so at the height of the growing season. This knocked our progress back a bit (it’s hard to get out and dig over your beds when you have an entire library’s worth of books to pack up, solicitors to liaise with, removal firms to book and all the rest of it), and the somewhat less than ideal weather did its best to hold us back as well.

But we persisted, and did as much as we could, including digging a truly epic spud patch (twelve three-metre rows of ’em) and clearing a tree stump or two in the process. We ended up with a handsome harvest of all sorts of good things: all of the last year’s staples, plus a few additions: sweetcorn, climbing beans, brussels sprouts, romanesco (it mostly bolted but was still very tasty as ‘yellow sprouting’ broccoli) parsnips, beetroot, redcurrants and salsify (although I have to confess, I haven’t dug any of the latter yet, so we’ll see what’s happened there after the first decent frost). Jo’s sunflowers were exceedingly lovely, and the decorative beds at the front of the plot produced a plethora of colourful blooms.

Here’s an assortment of pics from across the year (again, click the thumbnails…):

This pic was taken at the end of October. The plot wasn’t at its very greenest, with all the spuds harvested, and most of the surplus foliage cleared away, but if gives you a sense of the progress we’ve made since we took over: 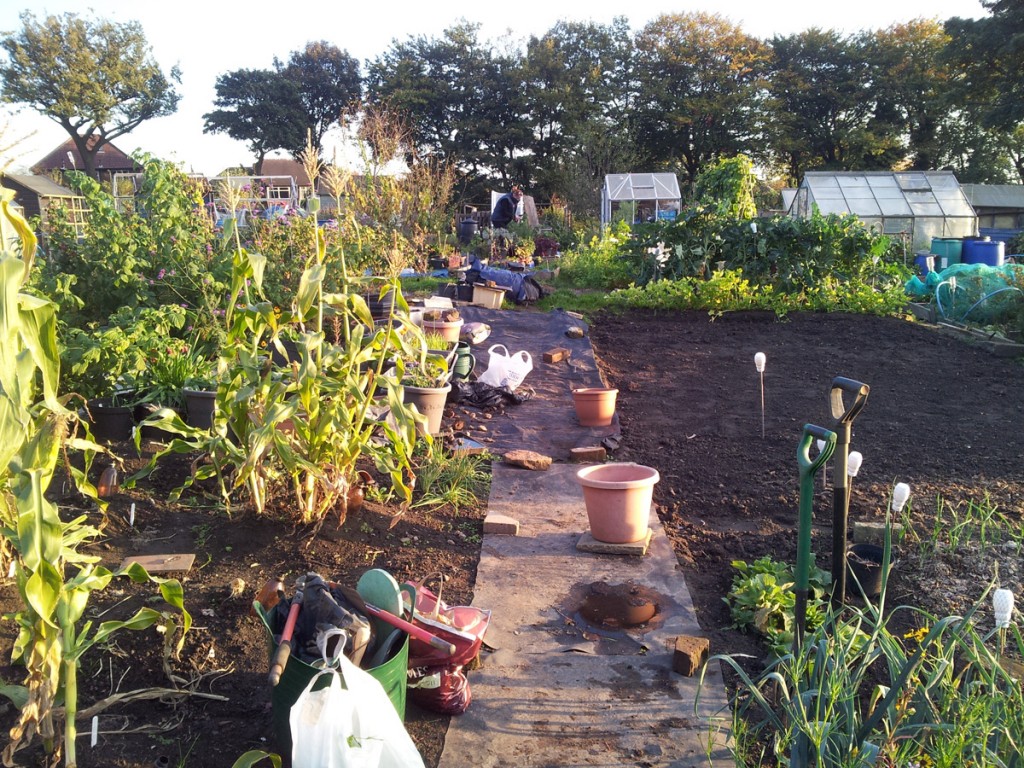 Jo and I have big plans for year three. The next round of clearing and digging over is under way at the front of the plot, and we’re stocking up on seeds for a big push in Spring.

I’ll be keeping you updated, so please do feel free to follow me on Twitter @nftallotment for updates.

A good demonstration of what can be achieved with a bit of Hard Graft!

Cheers Mark! Plenty more hard graft to come though. The photos don’t show our guilty secret: the back-third of the plot that we’ve hardy touched yet 😉

Well done looks fab! We took on a totally derelict plot that was above head height in brambles coated with bindweed. 8 years later it is great! Big improvements happen in the first 3 or 4 years and it gets much much easier! Should start blogging again myself as haven’t updated for ages now.

Thanks Rachel! Plenty more for us to do this year before we’ve finally knocked it into the sort of shape we’re looking for. Then it’s a case of year-on-year improvement, hopefully. Based on your last blog post your own plot looks great – you should get a few fresh photos up there when you can find the time, aye 🙂

Oh wow! This makes me very happy as we have just started work on plot52 which is looking much like your first photos – there is hope for us then! Well done on your hard work.

Hi Julie – Is that plot #52 on Langley allotments? Do come and say hello some time if so! 🙂

And thank you. It has been hard work, but really enjoyable work as well. Do stick with it (wherever your plot may be…)